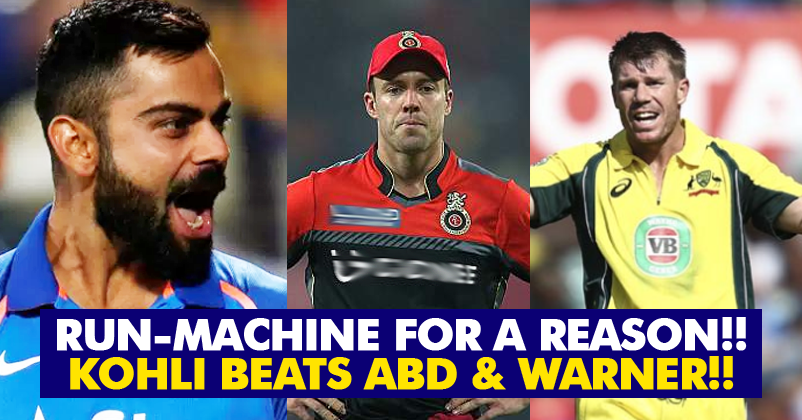 Virat Kohli has a worldwide fan following, thanks to the amazing batting skills he possesses.However, he failed to maintain the top ranking for a while due to loose performance in some matches.

But, thanks to his wonderful batting in ICC Champions Trophy 2017 that the shining Cricket star has raised to the top rank again. As per the latest Top 10 rankings by MRF Tyres, Virat Kohli has edged out David Warner & AB de Villiers to become World’s No.1 Batsman. The rankings were updated after the last round of group matches in the ongoing tournament in England. Virat Kohli, who had entered the tournament on the third position, reclaimed the spot after he scored a couple of amazing fifties. However, Virat is not the only Indian batsman in the chart. Opener Shikhar Dhawan has been rewarded for his performance in the series. Dhawan who was earlier on 15th rank, jumped five places to get 10th spot. And with this rise, Mahendra Singh Dhoni & Rohit Sharma have slipped down in the rankings. Yuvraj Singh has also shown a jump and stands at 88th rank right now. Have a look at the complete Ranking Chart Isn’t it a big news for whole of India? It’s party time guys!!

Continue Reading
You may also like...
Related Topics:India, Virat Kohli

Yuvraj Singh’s Lookalike Came To Watch His 300th ODI For India. Even Sania Mirza Tweeted About Him
Sohail Takes A U-Turn On His Match Fixing Comments! Here’s What He Says Now!