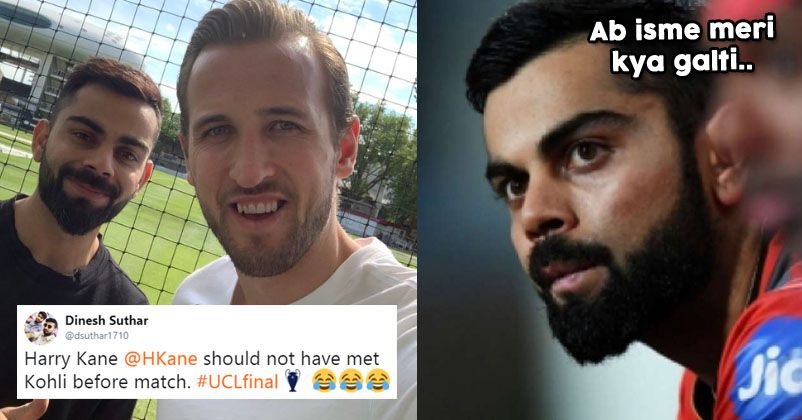 Indian cricket team captain Virat Kohli is one of the most successful and popular sportsmen in the world right now. And it is also not a secret that he like others also, like football and tennis.

He is a big supporter and fan of footballer Cristiano Ronaldo and tennis player Roger Federer. In fact, he has also met Roger a few times, mostly during Grand Slam events. Recently, he met England footballer Harry Kane and Harry posted a picture of them on his social media handle.

After a few tweets in the last couple of years good to finally meet @imVkohli. A great guy and a brilliant sportsman. 🏏 pic.twitter.com/vGEOs0gGlT

Now Virat is considered as a curse as last year during the FIFA world cup, he said that that he is supporting Germany. He even posted a picture with Germany jersey and coincidently Germany had one of their worst World Cup campaigns. No doubt, Kohli was trolled for jinxing the team.

So a week after Virat and Harry’s meeting, Tottenham lost the Champions League final to Liverpool. The team which played two tough games; quarterfinal and semi-final and won, lost the finals by 0-2.

Fans are now blaming Virat for meeting Harry and jinxing the team. Read the tweets-

I don't know football but I do know Harry Kane (apparently losing side) met Virat kohli who wished him the best of luck for final..😌😂😂😂 IYKWIM… #UEFAEuropaLeagueFinal #TeamIndia #ViratKohli

Mr. @imVkohli may be one of the greatest batsmen of all time, but he destroyed @RCBTweets as well as this poor man, @HKane ! 😑😑😑 pic.twitter.com/iLsfT8FBm5