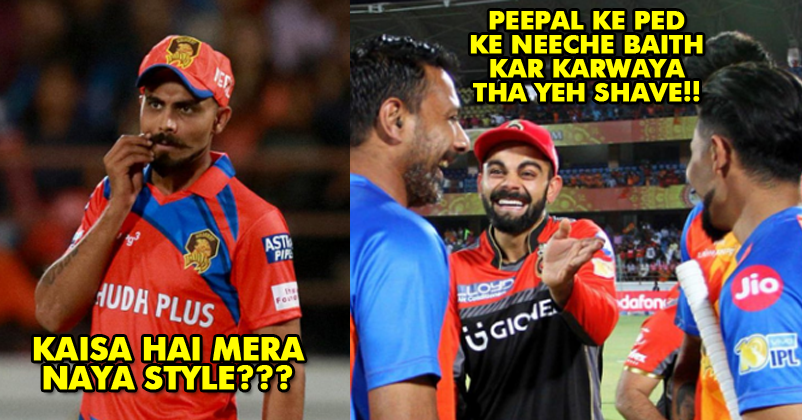 The all-rounder cricket player Ravindra Jadeja from the team Gujarat Lions is known for his beard style and the ace Rajputana look.

We all know that beard fashion is redefined and men are now choosing to not shave and make their beard game stronger. Similarly, Ravindra Jadeja had many takers of his this very interesting beard look.

Change the game on the field. Change the look in the dressing room. #BreakTheBeard #rajputboy #newlook #timeforchange #vivoipl #glvsrcb pic.twitter.com/iEr7i7gPIL

The funniest reaction came from his own teammate and our most favorite Virat Kohli. A particular photo on social media became viral as Virat Kohli couldn’t control his laughter after seeing Ravindra Jadeja’s new look.

The photo shows that Virat is laughing really hard along with Praveen while Jadeja is giving a blank look at them. Now we all know how social media becomes a little mean and starts trolling such kind of situations. The same happened with Ravindra Jadeja too, the Twitter was all crazy with some memes and trolls dedicated to this new look and Virat Kohli’s epic reaction.

Sir for a reason. Time even #Twitter changes the emoji of #Jaddu #BreakTheBeard

Friends will be friends.. Kohli couldn't resist himself from laughing on Jadeja's new look. pic.twitter.com/saqUtvGT4e

To be very honest, what Gayle did with Jadeja last night was fair. He deserves it for that beard.

I am going to keep the beard now. It will be called Jadeja beard. #BreakTheBeard

Well, Sir Ravindra Jadeja is one trendsetter. We don’t know whether people love it or not, we know that anything he does becomes a trend just like that. Do share your views on his new look with us in the comments sections.

Big Show And Braun Strowman Broke The Ring While Wrestling, Watch What Happened Next
Cricket Fans Will Love This Emotional Chat Between Kohli & Afridi! It’s Heartwarming!