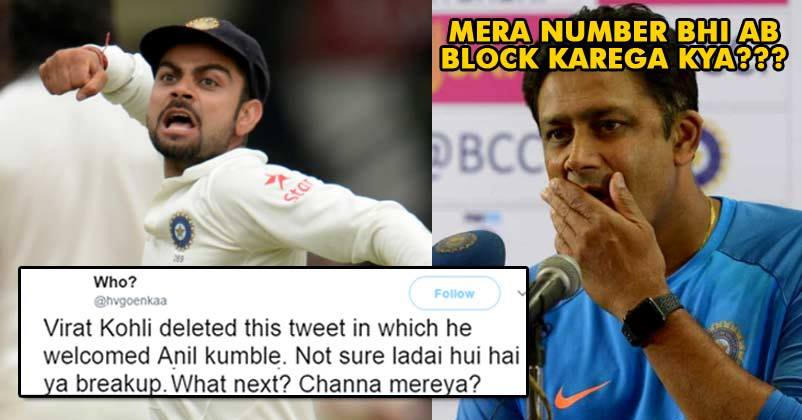 Virat Kohli and Anil Kumble’s fight seems to be nastier than it looked earlier. The former cricketer had to quit as a coach following the issues with the team captain and he was quite vocal about it in the resignation letter. Virat Kohli too admitted that he had problems with Kumble on a professional level due to which he wanted him out of the squad. A lot has been said and discussed on the topic in past many days. Social media was divided into sides where a section supported Kumble and the other supported Virat.

A recent action by Virat has now given yet another ugly turn to the controversy. Apparently, the India team captain has deleted the welcome tweet he posted for Anil Kumble last year when he entered the squad as a head coach. “Heartiest welcome to @anilkumble1074 Sir. Look forward to your tenure with us. Great things in store for Indian Cricket with you.”

This action of Virat has not gone too well with Twitterati who started bashing him. Have a look at some tweets-

Virat Kohli deleted this tweet in which he welcomed Anil kumble. Not sure ladai hui hai ya breakup.
What next? Channa mereya? pic.twitter.com/As6h6do1Yo

For Virat Kohli to unfollow Anil Kumble on twitter & then delete his old tweet welcoming him as the coach shows what kind of person he is.

virat-kohli-deletes-welcome-tweet-for-anil-kumble. How silly you are virat. Captaincy is not ur cup of tea @imVkohli

Virat Kohli deleted his last year's tweet welcoming Kumble as a coach. Thanks Anushka for teaching Kohli the importance of deleting old text

What did they choose

Captain Virat Kohli deletes the welcome tweet for Coach Anil Kumble which I retweeted yesterday. Looks like the matter is damn serious. pic.twitter.com/9Hn8oKyQt5

Well, let bygones be bygones now and hope for the better future of team India. The team is all set for its West Indies tour and we wish Virat & team shows an amazing performance. What do you think?

Kohli Finally Spoke Up On Controversy With Kumble And Fans Might Agree With Him
Nawaz Sharif Gives Prize Money To Players! You Will Be Surprised To Know How Much Each Player Got!