The retirement of former skipper and Indian cricketer MS Dhoni is one of the most talked about topics nowadays and while his fans want to see him play more, haters wish for a new talent in his place.

On September 12, Dhoni’s fans went into frenzy as they thought that MS Dhoni would be announcing his retirement from the international cricket. It happened because Indian skipper Virat Kohli took to the micro-blogging site Twitter and shared a photo which was of a match from T20 World Cup, 2016. 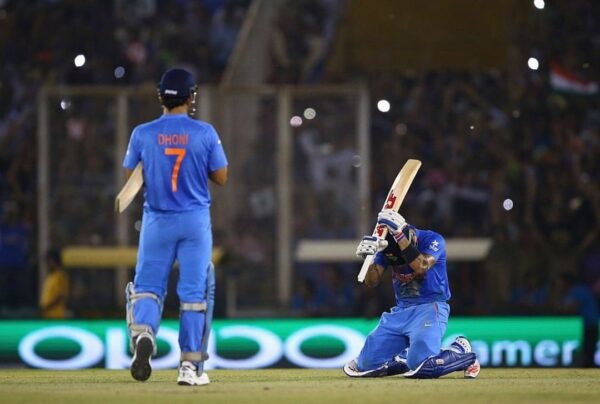 This match was played against Australia and it was won by India with the help of Virat’s brilliant knock. Kohli tweeted that Dhoni made him run like a fitness test in that match.

Here’s what Virat wrote, “A game I can never forget. Special night. This man, made me run like in a fitness test 😄 @msdhoni 🇮🇳”

A game I can never forget. Special night. This man, made me run like in a fitness test 😄 @msdhoni 🇮🇳 pic.twitter.com/pzkr5zn4pG

The tweet went viral instantly and people started thinking that Virat Kohli is hinting towards Dhoni’s retirement. Some online users also claimed that the wicketkeeper-batsman has called a press conference at 7 pm in the evening to make an announcement regarding his retirement. However some time later, the chief selector MSK Prasad and Dhoni’s wife Sakshi Dhoni refuted all these rumours.

When Virat Kohli was asked about his tweet, he said that there was no specific reason behind posting that tweet and it was just that he was thinking about that match.

When he was asked about Dhoni’s retirement, the Indian skipper said that whether it is liked or not but the truth is that experience has always mattered in the game. It has been proven by many players in the past and by Dhoni as well that age is just a number. Virat added that best part is that Dhoni thinks for Indian cricket and when to stop playing is a personal decision on which nobody should give his/her opinion.

On Saturday, Virat was addressing a press conference ahead of the start of South African T20 series. As per him, he has learnt the lesson that not everyone thinks in the same manner. He said that there was nothing on his mind while posting the tweet. He was at home and as he had not talked about this match openly, he uploaded the photo but it was taken otherwise.

The last match that MSD played for India was World Cup 2019 semi-final which India lost against New Zealand. Since then, Dhoni has not been a part of the team and his fans are missing him a lot.

The first match of the T20 series against South Africa will be played at Dharamshala and it will be pretty important for the players to show their class as it will help them in booking their seats for the T20 World Cup Championship which is going to take place in 2020.

All the best to the Indian team for the series against South Africa!

Messi Discloses The Reason Why He & His Long-Time Rival Cristiano Ronaldo Are Not Friends
Steve Smith Got Fooled By Fake Run-Out Attempt Of Jonny Bairstow; Steve Confesses, “He Got Me”