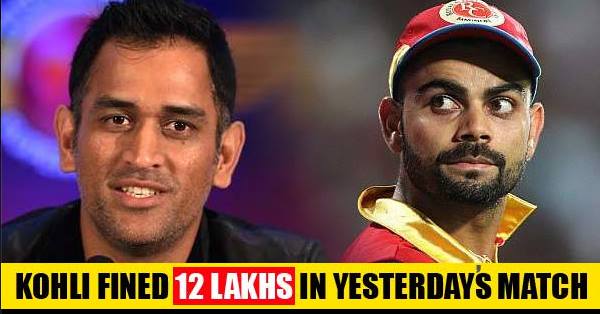 Virat scored fast half centuries which helped RCB in defeating Rising Pune Supergiants with 13 runs on Friday night. “Royal Challengers Bangalore captain Virat Kohli has been fined after the team maintained a slow over rate during last evening’s VIVO IPL match against RPS.” In a statement, IPL maintained, “Since it was his first offence of the season under the IPL’s Code of Conduct relating to minimum over-rate offences, Mr. Kohli was fined Rs 12 lakh.” Virat’s knock of 80 came in 63 balls during which he hit 2 sixes and 7 fours while AB De Villiers thrashed 6 fours and 2 sixes in his score of 83. These two batsmen took the score of Royal Challengers Bangalore to 185 for five. Afterward, the bowlers of the team restricted Rising Pune Supergiants to 172 for eight.

Bangladeshi National Arrested For Shooting Video Of Air-Hostesses On Indigo Flight
MS Dhoni In Another Controversy And You Will Be Shocked To Know The Reason!!