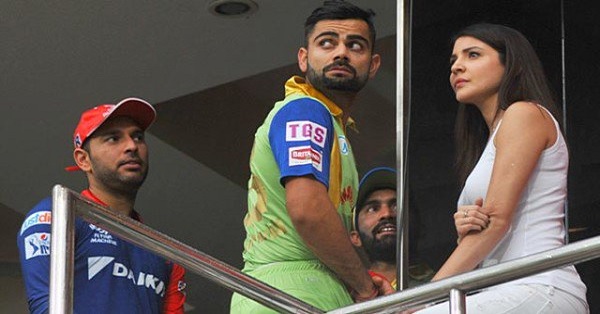 On Sunday, Virat Kohli, captain of RCB in IPL 2015, was accused of breaking players’ protocol because he met Anushka in the course of IPL’s 55th cricket match being contested at Bangalore’s M Chinnaswamy Stadium. As soon as DD did the batting initially and challenges RCB with 187 runs which is no doubt a big target to achieve, match was interrupted due to rain when Kohli and Gayle came for batting in the 2nd inning. The moment scorecard of RCB was 2/0, cricket match got disrupted; hence, cricketers had to leave the field. Just in few minutes, Virat could be seen with his girlfriend Anushka in the corridor and visuals of Kohli’s meeting Anushka were displayed on the stadium’s big screen. In accordance with BCCI Anti Corruption Policy, cricketers are banned from having a conversation or being cozy with public during the match. And although rain interrupted the game, it wasn’t actually over from the technical point of view. However, BCCI’s decision is still awaited as to whether an action will be taken against the skipper or not!
Update:- BCCI has issued an unofficial warning to Virat Kohli

What is your opinion regarding the whole matter? Did Virat make a mistake by meeting Anushka in the course of the match? Or should this act on his part be ignored? Share your views in the comments section below!

The New State, ‘Kingdom Of Enclava’ Will Be The Best Place On Earth
Most Hilarious Tweets- Ram Gopal Verma Puts AAG To Anurag Kashyap’s Bombay Velvet