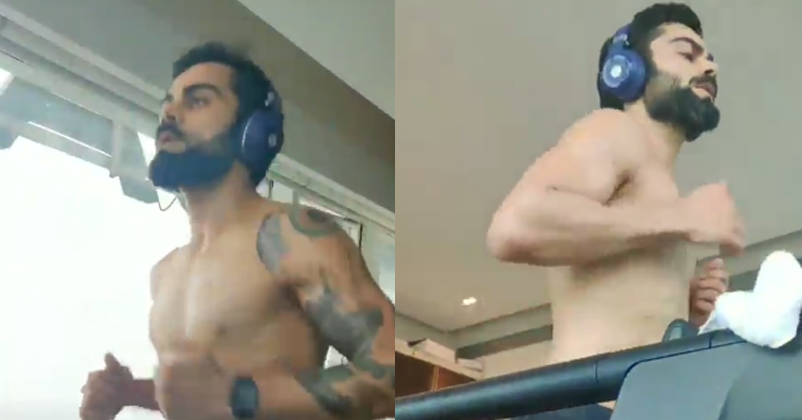 The Indian cricketers are now getting ready for the IPL 2020 which is going to be played in UAE from September 19 till November 10 and for this purpose, they are making sure that their fitness is up to the mark.

The Indian skipper Virat Kohli is not just one of the best batsmen of all times but he is also ranked among the finest athletes of the world. He is a fitness freak and has set very high standards of fitness for the younger cricketers. The RCB skipper is pretty active on social media networks as well and recently he posted a video of his workout session on his Instagram handle. In the video, Virat is running on the treadmill and his abs can also be seen as he has not worn any top.

Fitness is certainly very important in the present day cricket, especially in the shorter formats as fielding also plays a vital part in the game now. Kohli has many times stated that with the increase in his fitness levels, his game has also improved considerably which makes him more motivated to remain fit.

Virat will be leading Royal Challengers Bangalore in the IPL 2020 and he must be hoping to win the IPL this time as RCB has never won the IPL title. Kohli has been targeted by haters many times for the dismal performance of RCB as he has been with the Bangalore franchise since the inaugural edition in 2008 and from 2013, he has been leading the team.

What makes it more surprising is the fact that RCB has been considered one of the strongest teams in many seasons due to its star-studded lineup but their performance on the field doesn’t justify their stature on paper.

Virat Kohli is also regarded as the Greatest Of All Times (GOAT) by his fans and some former cricketers and there is no denying the fact that his fitness has made him stand apart from his contemporaries.

Yuvraj Singh Shares His Childhood Photo & Compares It With Latest Pic, Gets Trolled By Harbhajan
Jofra Archer Shuts A Hater Who Trolls Him Over Racism In The Coolest Way, Even Ben Stokes Reacts