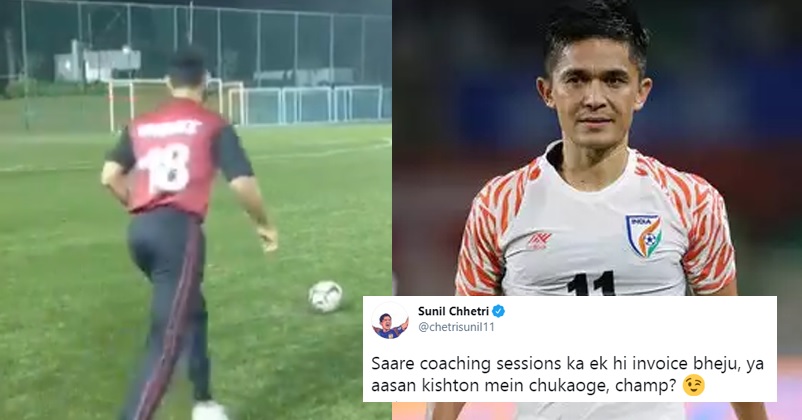 Virat Kohli, the skipper of the Indian cricket team, may be one of the greatest cricketers of all times but he is also very fond of football and on many occasions, he has talked about his love for the game. In fact, it is pretty common to see him playing football with his teammates during the practice sessions. Virat is also a very good friend of Sunil Chhetri, the captain of the Indian football team. 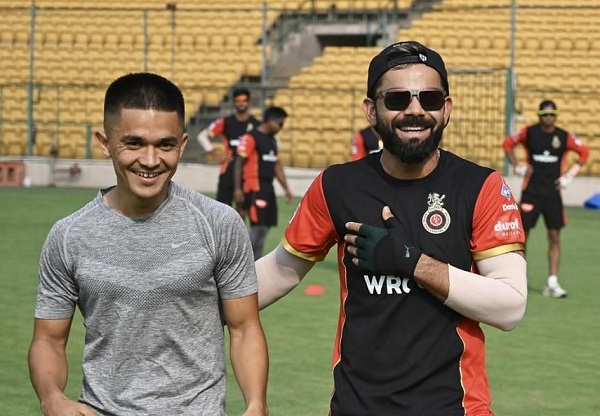 Recently they gave their fans something to laugh when they had a funny banter on the micro-blogging site Twitter. On Tuesday, Virat Kohli posted a video clip in which he was seen playing football, he played a good shot but he missed to score a goal as the ball deviated after hitting the crossbar. Virat captioned the video, “Accidental crossbar challenge”.

The clip soon went viral and Virat’s fans started praising him for his football skills. The video was also noticed by Sunil Chhetri who didn’t leave the chance of pulling Kohli’s leg as he commented, “Saare coaching sessions ka ek hi invoice bheju, ya aasan kishton mein chukaoge, champ?” (Hey champ, should I send one invoice of all coaching sessions or will you like to pay in easy installments?)

Virat Kohli will be leading the Indian test team in the finals of the World Test Championship which will be played against New Zealand at Southampton in June. With this, he will become the first cricketer to play all the finals of the ICC tournaments as he had played the finals of U-19 World Cup, ODI WC, T20 WC and Champions Trophy.

The Indian team qualified for the finals of the WTC after it defeated England by 3-1 in the four match test series which was played in India before the IPL 2021.

Danish Kaneria Roasts Mohd. Amir Over Comment On Rohit Sharma, Says “He Is Far Superior To You”
“Push & Throw Him On Ground If He Comes In Your Way,” Mushfiqur Rahim’s Comment Stirs Controversy