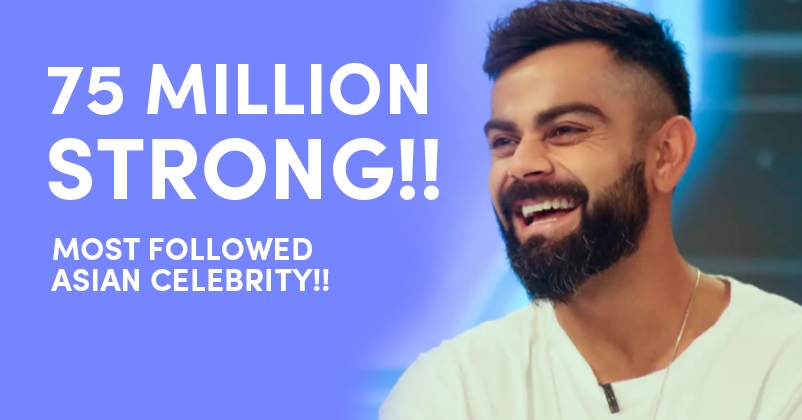 Indian cricket lovers are eagerly waiting for the IPL 2020 to start so that they can watch their favourite cricketers on the field. There is no denying the fact that the Indian cricketers have a huge fan following but one cricketer whose fandom knows no limits is none other than the Indian skipper Virat Kohli.

Virat Kohli has an enormous global fan base too and it can simply be understood by the fact that he is followed by a large number of people on social media networks. The factors that make him so popular are his cricketing talent, his love for fitness and his aggressive as well as go-getter attitude with which the young generation relates easily.

The Indian skipper has now broken one more record, not on the cricket field but on the pitch of social media networks as his fan following has reached the 75.5 million mark on the photo and video sharing app Instagram. With this, the Delhi cricketer has become the first Asian celeb to cross the 75 million mark and how we can forget to mention that his rank is fourth when it comes to the most followed sportsperson in the world on Instagram.

The top three most followed sportspersons on Instagram are Cristiano Ronaldo, Lionel Messi and Neymar Jr.

If we talk about Virat’s fan following on other social media networks, he is followed by nearly 36 million people on Facebook and around 37 million people follow him on the micro-blogging site Twitter.

The Indian skipper is also the skipper of the IPL team Royal Challengers Bangalore and he has reached Dubai along with his team on Aug 22. However, the RCB players have not started their practice sessions as they have been quarantined for 7 days in their hotel rooms as per the guidelines.

Fans of RCB are hoping to see their team win the IPL for the first time, though the last three seasons have been quite disappointing for the team. Virat has been associated with RCB since the start of the tournament in 2008 and from 2013, he has been leading the team.

Do you think RCB will be able to clinch the title this time? Let us know your views.

Aakash Chopra Takes A Funny Jibe At Brad Hogg For His Latest Tweet On Pakistan Vs England
“Dhoni Was Our Hero, Especially For Someone Like Me Who Comes From A Small Town,” Says KL Rahul