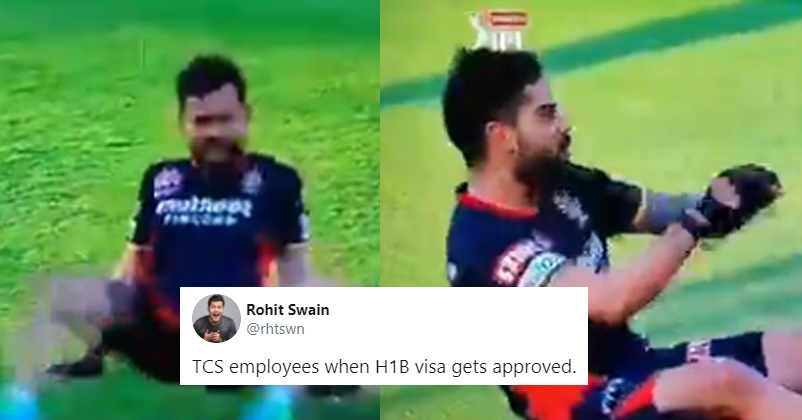 Virat Kohli, the skipper of Royal Challengers Bangalore has a charismatic personality that is admired even by his opponents. Moreover, there is no denying the fact that he is very energetic and has a positive impact on people around him.

The Indian skipper is also a favourite meme material for creative artists, especially during the IPL as his team has not won IPL even once despite the fact that he has been associated with RCB since 2008 and has been leading the side since 2013. Recently, a video of the fun-loving cricketer went viral in which he was seen doing bhangra while taking part in the warm-up session before the match against Kings XI Punjab.

This is not the first time that we have seen Virat Kohli’s dancing skills and earlier also during a match, he was seen shaking his legs just to cool down his senses. Jofra Archer had a funny response to this act of Virat, check out his tweet:

When she tells you go and lock the door https://t.co/5bHI9FZxgD

The micro-blogging site Twitter flooded with hilarious memes and reactions on Kohli’s dance and here are some of the selected tweets:

Great example of passion and joy in doing whatever! #Cricket #ViratKohli https://t.co/U45d8UL4tH

When backbenchers got 30 out of 100 pic.twitter.com/pMb9dRyHNa

Me, when someone plays 90s Bollywood music https://t.co/aaZ8KBajqI

When your mom says “khane me chicken biryani banai he” https://t.co/VTZFhKDzGV

As far as the match is concerned, it was KXIP which went home doing bhangra because they won the match by 8 wickets. RCB took the decision of batting first after they won the toss and posted a total of 171 runs with the help of Virat Kohli’s 48 runs.

KXIP’s skipper KL Rahul led from the front as he played an innings of 61 runs and remained not-out till the end. He was well supported by his opening partner Mayank Agarwal (45) and West Indian cricketer Chris Gayle who scored 53 runs. However, the match had a nail-biting finish as Chris Gayle got run out when KXIP needed only one run to win. Nicholas Pooran who came to bat next had one ball to score the winning run and he made the match memorable by hitting a six on the final ball of the innings.

This win must have brought some relief for KL Rahul and team management of KXIP as they were not able to register their second win in the tournament. Presently KXIP is at the bottom of the points table because they have won only 2 matches out of 8 matches they have played while RCB is at the third spot with 5 wins out of 8 matches.

Do you think that KXIP has any hope of winning the IPL 2020? And how did you find Kohli’s dance?