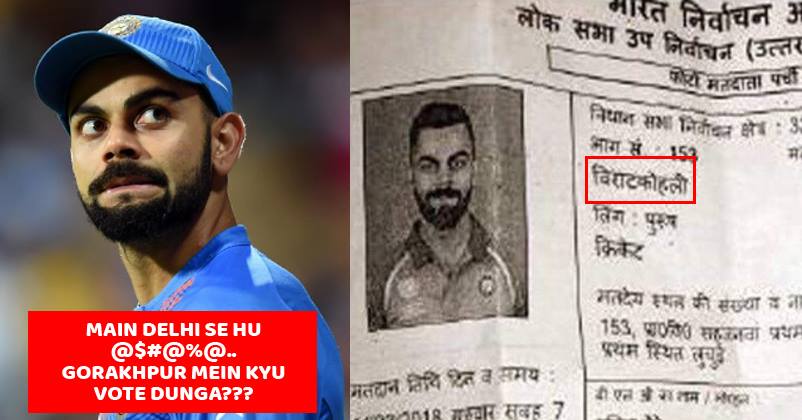 The skipper of Indian cricket team Virat Kohli hails from Delhi and presently, he is staying in Mumbai but a voter slip of his name has been noticed in Sahjanwa sub-division of Gorakhpur.

The matter becomes more controversial as the bypoll elections are going to take place in the region on Sunday. 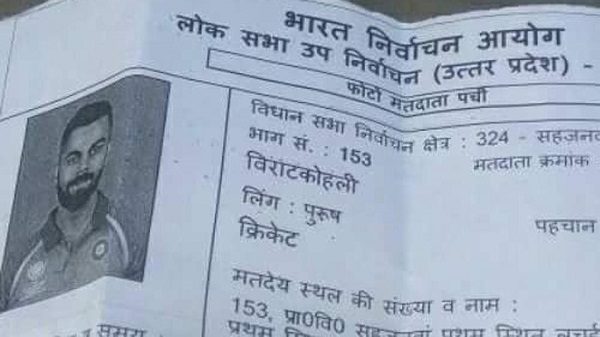 On Friday, the Election Commission ordered an enquiry into the matter and Ratnesh Singh, the deputy chief electoral officer, has given assurance that as the investigation report will be submitted by the Gorakhpur administration, an action will be taken on officers responsible for it.

A voter slip was noticed by a booth level officer Sunita Choubey in which Virat Kohli was described as the voter number 822 of Sahjanwa assembly segment. She told TOI,

“I was surprised to see Virat Kohli’s name and picture on a voter’s slip during distribution of slips. When I checked, the name was not on the voter’s list. I handed over the slip to councillor of the area.”

Rajiv Rautela, the DM of Gorakhpur, stated that the SDM and tehsildar of Sahjanwa assembly constituency have already been questioned and some more discrepancies were reported in the voters’ list so they are also being investigated.

Oh God Kohli is in the voter's slip not on the voter's list. No wonder, there are many such slips and lists, which will come out. When the government insists on Aadhar card some political leaders oppose it and the reasons many. – https://t.co/PnfAG6BCvb

LOL, but why was he in team India jersey!?!

Virat Kohli issued voter's slip in Gorakhpur; probe ordered @PMOIndia @narendramodi y we are not linking Aadhaar to election card? It’s so easy to implement & while voting person can just get their finger scanned & then can vote? @Swamy39 @suhelseth https://t.co/4rL9vL9w8X

Driver Returned Woman Bag With Rs 80,000. What She Did In Return Proves Humanity Is Still Alive
Class 12 Student Took His Life Because He Left Questions Of 9 Marks In Boards Exam