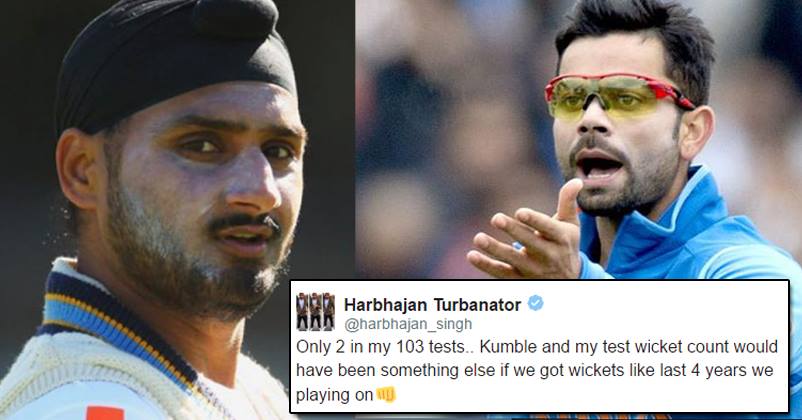 India defeated the Blackcaps in the third Test at the Holkar Cricket Stadium, Indore. India claimed a 321-run victory over New Zealand in the final test. India has conquered the test series by a white wash. Due to this 3-0 clean sweep, India has retained their No.1 position in the ICC Test Rankings. Indian team was presented the ICC Test Championship Mace by the little master Sunil Gavaskar after the Test.

But despite the victory, someone is still in a bad mood, someone is still feeling sour, and that someone is none other than Harbhajan Singh. The Turbanator tweeted expressing his disappointed with the pitch in Indore. He said that the pitch already looked like it was ‘two days old’. Not only this, he even made the bold prediction the final India vs New Zealand Test won’t last for more than three-and-a-half days. See his tweet..

Already looks like 2 days old pitch before the 1st bowl is bowled..my predictions match won't go more then 3 and half days.. https://t.co/obn4qVRnP6

To this a fan tweeted him asking where were his complaints when he was playing against AUS, SA in 2004, 2008.

But that’s not all, Harbhajan Singh went a step further and said that his test wicket count would have been very different if he had played on the same kind of pitches.

Only 2 in my 103 tests.. Kumble and my test wicket count would have been something else if we got wickets like last 4 years we playing on👊 https://t.co/fvkdVw1I1v

Although the off-spinner congratulated India on their 3-0 series win, but it looks like he didn’t make the comment in a good taste. Harbhajan is currently playing in the Ranji Trophy. The people on twitter took a jab at his comment.

Harbhajan Singh has taken 417 wickets, the fans told him to remember his class, and not be desperate to stay relevant.

Bhajji, suck it up like a man and move on buddy. You have over 400 tests scalps. Show some class.

When the Indian test skipper Virat Kohli was asked about Harbhajan Singh’s recent tweet on the kind of pitches offered to Ravichandran Ashwin, Virat Kohli said, “Even if it is a turning pitch, you have to bowl well. Spin is just not something to happen only off the pitch. It depends on how many revs (revolutions) you give to the ball and the use of the shoulder. When we lost to New Zealand in the World Cup, I quite clearly remember, suddenly their spinners were quality bowlers and we were found out! I don’t see anyone talking about it now.”

Virat said that these were the same NZ spinners who were credited for victory against India in the World Cup. If they were that good then why did not they pick up wickets? Virat said that it’s all about mindset, Indian fast bowlers have picked up wickets everywhere. It’s not about pitch or conditions, but mindset.

So guys what do you make of Harbhajan’s tweets, do you agree with what Virat Kohli said? Do share your views and opinions in the comments!

Sehwag And Ashwin Get Trolled By Wives Aarti & Prithi! You Can’t Miss This Cute Conversation!
You’ll Respect Sushma Swaraj Even More After Seeing Her Gesture For This Son Who Lost His Father!