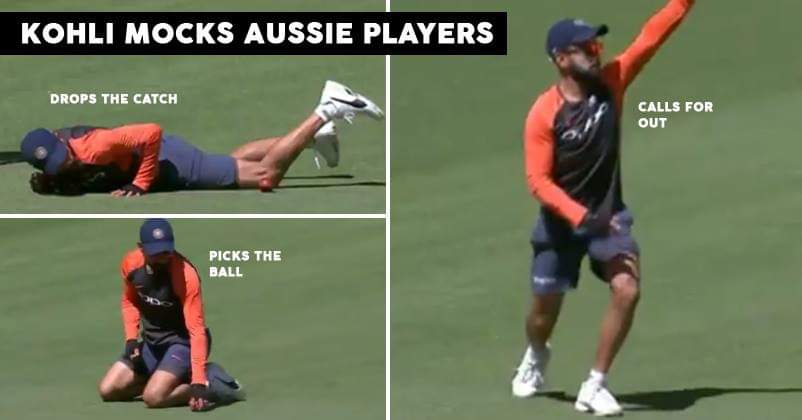 Virat Kohli may be one of the most celebrated cricketers in the world at present, but that does not stop him from getting involved in controversies.

Recently, at the match versus Australia, Virat was declared out after one of the most controversial catches the series has seen. This sparked a heated debate.

Although it was pretty clear that the catch was not a clear one, the umpire had moved in favour of Australia, angering India fans.

And Virat too seemed rather upset over the event and yesterday, he found a way to vent his frustration. A video has emerged which shows Virat mocking the Australians.

In a practice session, he imitated the catch and did the exact same thing Peter Handscomb did. He even raised his fingers like the Aussies after the catch, to make it more obvious.

Just Virat things. The video has been rightly captioned. Twitter found the video hilarious. Virat has received a lot of flak for his controversial behavior lately. But that does not seem to stop here either!

Aussie Media Claims That Virat Insulted Tim Paine By Making This Statement. Check Out
Ishant Sharma And Ravindra Jadeja Get Into An Argument During Match. You Can’t Miss The Video