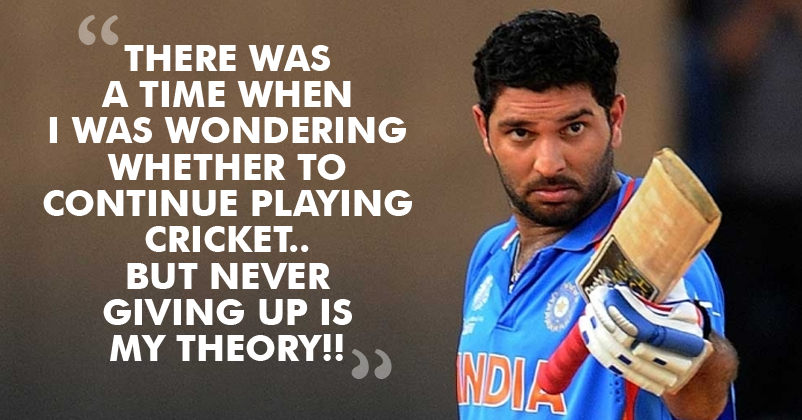 Cricketer Yuvraj Singh may have played his one of the best knocks of 150 runs yesterday against England but there was a time when he was thinking of taking retirement after a long battle with the disease of cancer. But what stopped him from taking this step was the confidence shown in him by the skipper of Indian cricket team, Virat Kohli. Yuvraj said this after India won the second ODI of the series,

“Self-confidence is always there when you have the backing of the team and captain. I think Virat has showed a lot of trust in me and it was very important for me that people in the dressing room trust me. There was a time when I was wondering whether to continue or not to continue. I think a lot of people have helped me throughout this journey. So, never giving up is my theory. So I never gave up, kept working hard. I knew times will change.” Yuvraj scored his last International century in Chennai while playing in 2011 World Cup and till now, he has scored 14 centuries in ODIs. He expressed his happiness in these words,

“It feels great. It’s been a while since I got a hundred. I came back after recovering from cancer, the first 2-3 years were very hard. I had to work hard on my fitness and I was in and out of the team. I was not able to get a permanent spot.”

Yuvraj got his spot back in the Indian team after he delivered some really wonderful knocks in domestic tournaments which also include his knock of 260 runs, scored against Baroda last year in October. “I’ve been batting well in the domestic season. And I’ve been hitting the ball really well. I wanted to make it big on my day.”

However, his comeback did upset some people as they felt that the selectors were applying reverse gear but it didn’t matter to him as he says,

“I don’t think about who’s reacting to what nor do I read newspapers. I don’t watch TV too. I try to focus on my game and prove a point to myself that I’m still good enough for international cricket. So I guess I was good today.” “Definitely, 150 is a huge score in one-day cricket. It’s my highest and taken a long time to get there but I am very happy it happened today. Hopefully, in the coming time I can contribute more consistently.”

Dhoni also played a wonderful knock of 134 runs and they both sailed India to victory with the partnership of 256 runs.

When Yuvraj was asked what they both were discussing during their partnership, he said,

“Nothing much. We two were the most experienced players in the team. He realised that I was getting boundaries. He was just there rotating the strike and our first target to make a 25 runs together then go for 50 partnership. After that we wanted to take it further to 100. I think once that happened we were both set.”

Yuvraj and Dhoni have given some pretty good moments to Indian cricket fans earlier as well. As per Yuvi,

“We always have been batting together since he started his career. Obviously I started much earlier. Mahi and me have played a lot of games for India. The camaraderie is always there. I think we have a lot of understanding when we bat together. Running between the wicket is always good. I hope it works on the future as well.”

Talking about the England side, he said,

“They have been playing pretty well. I feel they have a lot of dangerous players in the middle-order and they can actually hurt a lot of bowlers. It is a young group and the more they play, the more they will get better. It looks like a dangerous side for the future. The more conditions they play in, the better will they get as a side.” However, he also feels that the changes in rules have made it tough for the bowlers. According to him,

“Over the generations, England have had some great players. Those times it was Harmison and Flintoff. I just feel rules of one-day cricket have changed a lot and it is hard for bowlers to bowl with five inside when you have no help from the wicket. England have played brilliantly well in the last two games, they’ve scored 350-plus.”

We hope to see some more sensational knocks from the stylish left-hander batsman in the future.