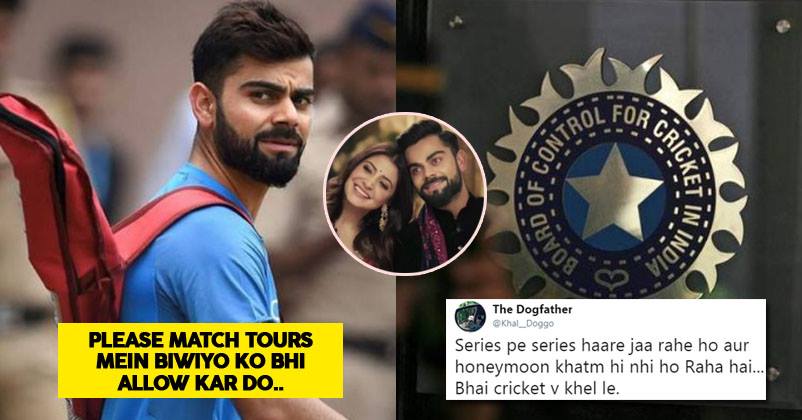 Indian cricket team captain Virat Kohli has requested to change in the rule after Board of Control for Cricket had restricted the stay of wives of players and support staffs to two weeks before the start of England Test series in August.

But then Kohli has requested to BCCI to allow the wives of the players to accompany them on all overseas tour. As per the report, Kohli first approached a top BCCI officer with the issue and he was assured that this message will be conveyed to the Committee of Administrators.

But the current rule allows WAGs of India’s cricket to accompany them to only 14 days after the first two weeks of 45 days tour board.

A few months back Anushka was slammed on social media after she appeared in the Indian team’s picture at the High Commission event in London during the tour.

But seems like COA is likely to postpone the decision now. According to the news, COA said that “ Yes he requested but we are not going to take any decision soon, we have said we will leave it to the new office bearers. The policy will not change now.

Yes he requested but we are not going to take any decision soon,we have said we will leave it to the new office bearers. Policy will not change now: Committee of Administrators (CoA) Sources to ANI on Virat Kohli requests BCCI to allow wives for whole overseas tours pic.twitter.com/pEYyWmXl7H

And after hearing this, people start trolling Virat on the twitter

It shows @imVkohli is trying to push his personal plans.Virat you are good cricketer but few rules need to be followed by everyone & especially when one is captain.Either play cricket or stay back with your wife. @BCCI

OMG so many requests from Our Captain
Ufffffffffffff
Phew 😂😂😂😂😂😂😂😂😂

I think virat is scared of the new supreme court judgement