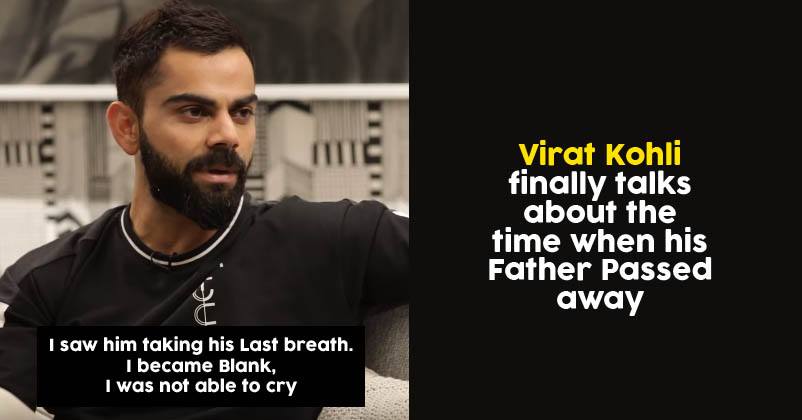 Indian skipper Virat Kohli is known for his stern approach towards the game of cricket. Kohli is one of the best cricketer of the world right now he has wooed everyone with his batting skills and aggression on the field which made the opponents fear him when he walks into the field.

Virat Kohli recently in an interview with Graham Bensinger revealed a lot about that phase of his life which made him a strong person that he is today. In December 2006, the 18 year old Virat was playing for Delhi in Ranjhi Trophy against Karnataka.

Virat was playing a four day match and he was unbeaten with 40 runs the next day his team needed him to make the spells with his bat so that they don’t have to follow up. But around 2.30 in the night his father breathed for the last time. They rushed to the hospital immediately, but they couldn’t revive his father.

Kohli said, he saw his father breathe his last and his family members broke down, but I didn’t know what should I do, what happened and I was blank. However, Kohli made a promise to himself and his family on the very day that’ll play for team India one day to fulfill the dream of his dad.

The 18 year old Virat called his coach in the morning who was in Sydney and informed him about what him and also said he wanted to play the match because leaving a match can never be acceptable no matter what.

Kohli scored 90 runs before he was dismissed which helped his team to avoid the follow up. After which he came home to do the last rights of his father. Virat further said, I broke down in the dressing room after my teammates tried to console me as I got overwhelmed with the emotion.

Virat was really close to his father and after he left things changed for his younger son. You can watch the whole conversation here.

Continue Reading
You may also like...
Related Topics:Virat Kohli, Virat Kohli career, Virat Kohli debut, Virat Kohli Said I Was Blank After My Father's Demise But Determined To Play For Team India

Nathan Lyon Changed The Bails For Fun & Joe Root Put Them Back As Earlier. Video Is Too Funny
India’s Head Coach Ravi Shastri Gets A 20 Per Cent In His Salary