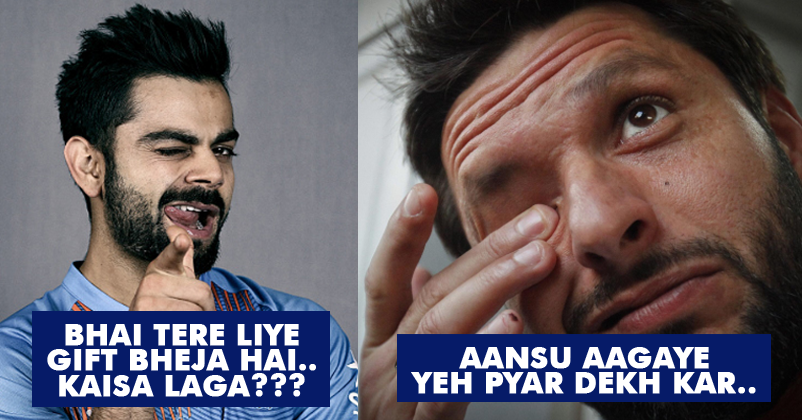 Team India is all hearts when it comes to expressing love for anyone. Even though we have a strained relationship with our bordering country, the kind of love India and Pakistan share in the world of cricket is exceptionally amazing.

The two teams will fight it out on the cricket field but post that things are peaceful and friendly. Recently, Shahid Afridi announced his retirement from International cricket and team India had a heart touching gift for the cricketer.

The ace cricketer ended his 20 years long International Cricket career that has set so many records. He has put up amazing matches against India, with some high moments and nail-biting sequences. There was even the epic semi final match in World Cup 2011 when India and Pakistan were battling it out on the field under Shahid Afridi’s captainship. These memories are indeed priceless and that’s why the entire Indian cricket team’s gesture is something which is priceless and worthy of only smiles.

They gifted an Indian cricket team T-shirt signed by all the team members. The T-shirt belongs to Kohli and he had a special message also written on it – “always a pleasure playing against you.”

Virat Kohli's shirt, signed by Indian team, for Shahid Afridi, with a message "always a pleasure playing against you." pic.twitter.com/KexlCjTNeZ

In case you’re not able to load above tweet then here’s pic of t-shirt gift that Team India gave to Shahid Afridi:- The people were all in awe after seeing this. Here’s how they reacted:

good to see that players of both nations respect each other.

I admire Kohli. It only he is great Batsmen but a great Human being and being aggressive in the field is his Class!!

They just respect him .He is a legend. thanks #Virat

Seeing this made me genuinely happy! Its not the players but the politics that has sank one of the greatest sporting rivalry. #ShahidAfridi

Well, we surely can relate to the kind of feelings every cricket fans are going through right now. We hope we witness more such moments in the coming future.

Sanjay Manjrekar Says He Didn’t Call Pollard “Brainless”! Check Out The IPL Clip & His Tweets
Big Show And Braun Strowman Broke The Ring While Wrestling, Watch What Happened Next