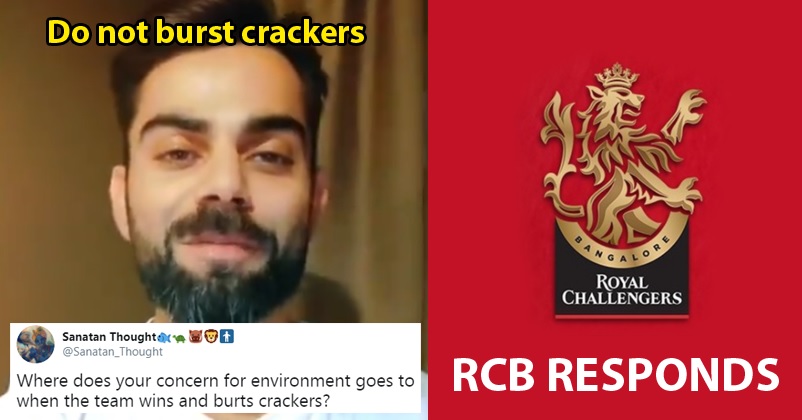 The Indian cricket team skipper Virat Kohli is presently in Australia with the Indian squad as India is scheduled to play four test matches, 3 T20Is and 3 ODIs over there. The ODI series will start from November 27 but Virat won’t be a part of the complete tour as he will return to India on paternity leave for the birth of his first baby.

However, things don’t seem to go right for Kohli at the moment as his team Royal Challengers Bangalore once again failed to win the IPL in this season. He has been associated with RCB since the start of the league in 2008 and since 2013, he has been leading the team as well. Recently, he invited the wrath of netizens when he posted a video in which he wished everyone a Happy Diwali but also asked people not to burst crackers. He suggested lighting diyas and relishing sweets with family members to keep the environment clean.

Here is the video if you have not watched it so far:

The advice of not bursting crackers didn’t go well with the online users and they called Virat hypocrite for keeping mum when RCB and IPL used to burst firecrackers after each IPL match. He was slammed for the video which was posted by RCB on the birthday of its skipper in which the visuals of firecrackers were clearly seen.

Bhai Virat, we really like u. You're our best batsman. But unless you've guts to say please celebrate bIoodIess Eid and Treeless Xmas, spare us this activism. We're fed up with celebrities telling us what to do and what not. Anyway, Happy Diwali and happy upcoming fatherhood.

Stop using car and AC it's very harmful for our environment pic.twitter.com/z6jqNLceq4

Where does your concern for environment goes to sleep on #Bakrid, #NewYear, #Christmas and even when the team wins and burts crackers?
Every Tom, Henry & Dick becomes Woke only during Hindu festivals.https://t.co/Kyn9OmCmI7 pic.twitter.com/WjuI2KGFoD

Virat's cars are green cars, the eco friendly kind. These cars run on CO2 and emit O2. Just like trees even his house ACs and refrigerators are eco friendly.
Their carbon footprint is zilch/zero.

Its time indians also learnt some things outside of cricket from him.

Do you know that the Crackers burst worldwide during New Year Eve is 500 times more than Diwali??

When will be appeal for “Cracker Free New Year??

At least can you appeal for “Cracker free IPL and ICC events”??

However, now the official Twitter handle of RCB has posted a tweet in which they have revealed that they didn’t burst crackers and the visuals were taken from an old footage of UAE’s Flag Day which is celebrated on November 3.

This is what RCB tweeted, “Hope you are all enjoying a happy and peaceful Diwali with family and friends. To clarify, the fireworks shown in RCB’s recent celebratory video was archival footage of UAE’s Flag Day celebrations. RCB continues to work hard to protect the environment like we’ve over the years.”

Hope you are all enjoying a happy and peaceful Diwali with family and friends.🪔 To clarify, the fireworks shown in RCB’s recent celebratory video was archival footage of UAE's Flag Day celebrations. RCB continues to work hard to protect the environment like we’ve over the years.

What is your take in this regard? Let us know your opinion.