Virat Kohli is one of the most popular cricketers of the world and social media has played an important role in letting us know that there are few people in this world who are quite similar to him as far as the looks are concerned.

However in the third T20 match against Australia, the cricket fans were left stunned as the real Virat Kohli was playing on the field while his doppelganger was one of the spectators. The doppelganger was dressed in the Indian jersey and also sported a beard but what increased the similarity in looks manifold was the black glasses that the doppelganger was wearing. 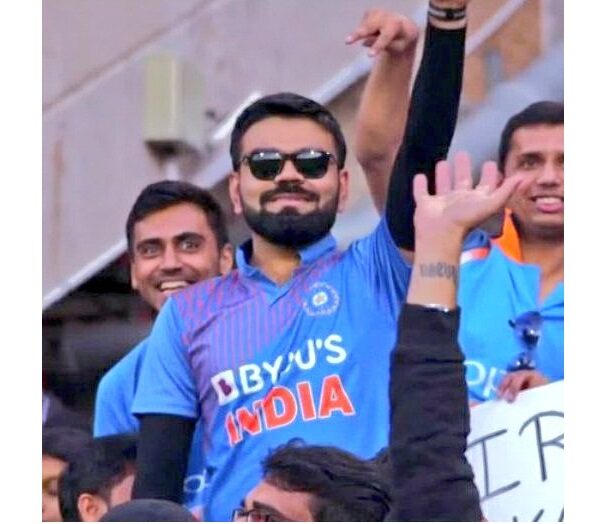 Twitterati went crazy after seeing Virat and his doppelganger during the match and the micro-blogging site was soon flooded with memes and hilarious tweets. Here are some of the selected ones:

God- Let me handle it: pic.twitter.com/sofAPCPmmO

Kohli as Kohli as
a batsman a captain pic.twitter.com/bwxe0QGMap

#INDvsAUS
Getting the answer by

As far as the third T20 is concerned, the hosts managed to stop India from whitewashing the series by defeating them by 12 runs in the match which was played at the Sydney Cricket Ground. Australia gave a target of 187 runs to India with the help of brilliant half centuries of Matthew Wade who scored 80 (53) and Glenn Maxwell who contributed 54 (36) with the bat.

The Indian innings didn’t start good as KL Rahul got out early and Shikhar Dhawan also failed in capitalizing the good start. It was Virat alone against the Aussie bowlers as he scored 85 runs (61) but didn’t get the much needed support from other batsmen and team India was able to score only 174/7 in the stipulated 20 overs.