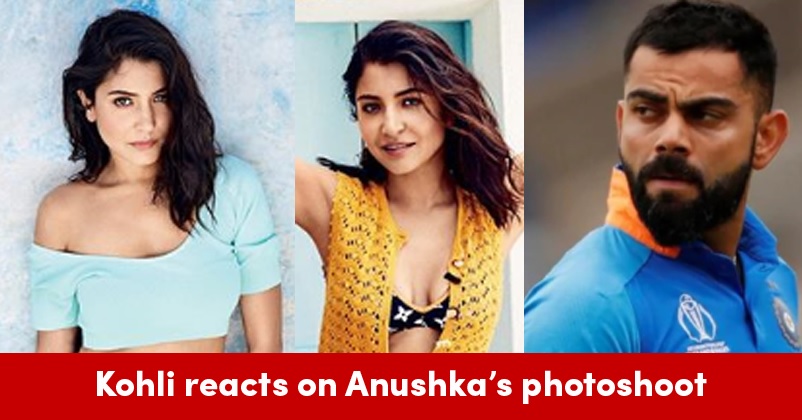 India is now in the unlocking phase after the lockdown which was imposed for nearly 3 months in the country due to the coronavirus pandemic. The shootings of the serials have resumed and soon the movie actors will also start shooting. Anushka Sharma, the beautiful damsel, did a photoshoot recently for the Vogue magazine and we must admit that she looked just stunning in the shoot which was based on the theme of beachwear.

Anushka Sharma shared four photos from the photoshoot on her official Instagram account and her fans went crazy after seeing the beautiful diva in a hot avatar. Soon comments along with emojis started flowing but one comment that stood apart from all others was the one made by Virat Kohli, Anushka’s hubby and the Indian cricket team skipper.

In the first photo shared by Anushka, she is seen in an off-shoulder blue crop top and bottoms with floral pattern on them along with netted pants. She captioned the image, “The cool breeze, the steady waves, some sand on my skin, the sun on back and salty hair. It was a good day”.

The cool breeze , the steady waves , some sand on my skin , the sun on back and salty hair . It was a good day 💜 @vogueindia @anaitashroffadajania

Virat responded with a lovestruck, heart and a fire emoji on the first photo.

In the second photo, Anushka is looking sizzling hot in the black printed two-piece with yellow crochet shrug.

It left not just Virat spellbound but actress Alia Bhatt was also left in awe. While Virat posted a heart and two lovestruck emojis, Alia wrote, “Such a beaut”.

Check out the comments:

In the third and fourth photos also, Virat posted the same comments. Anushka captioned the third image, “In the end, it’s only a game of light and shadow”.

In the end , it's only a game of light and shadow 💫 @vogueindia @anaitashroffadajania

The fourth photo was captioned as, “For Shore” as Anushka looked perfectly ready for having some fun on the beach:

Virat and Anushka make one of the most adored and loved couples of India and their fans also refer to them as Virushka. The Indian skipper is presently in Mumbai with his wife as no cricketing events are taking place in the country as of now.