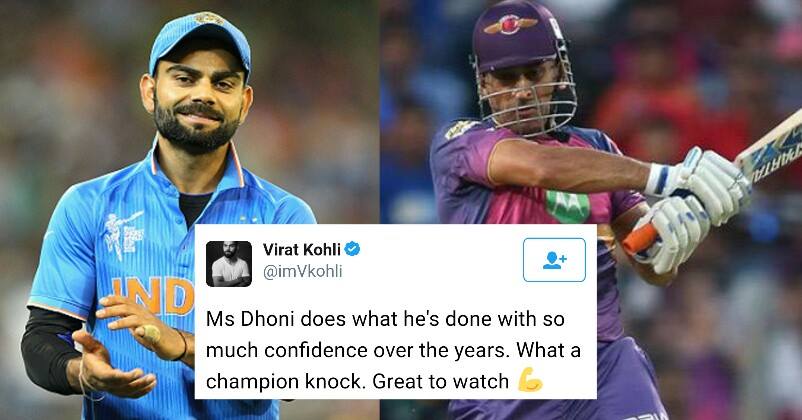 M.S Dhoni is putting to rest all the heavy criticisms that are coming his way for his performance with the bat in this 2017 Indian Premier League.

The ace cricketer was under the belt of criticism but he was at his best this Saturday evening with his scores of 61 runs made from 34 balls that helped the team Rising Pune Supergiant defeat Sunrisers Hyderabad with an absolutely amazing last-ball finish.

Dhoni’s last ball knock was clean and drew praises from all over. The Indian Captain Virat Kohli couldn’t help but tweet about the same “M.S Dhoni does what he’s done with so much confidence over the years. What a champion knock. Great to watch.”

Ms Dhoni does what he's done with so much confidence over the years. What a champion knock. Great to watch 💪

Legend @msdhoni proved again that why he is called the best "Finisher" in the game. To all his criticizer "SHUT THE HELL UP" #RPSvSRH

Mumbai Indians Players Are Not Playing Well Coz They're In A Hurry To Go Back And Watch Replay Of #MSDhoni's Innings#RPSvSRH #Dhoni #MIvDD pic.twitter.com/hP44dTp6lK

The lion takes 4 steps back not because it is afraid but to create a momentum to attack. # Dhoni #RPSvSRH #reposted

Steve Smith who replaced Dhoni as the skipper this year told the media post the match,

At the end, Dhoni said,

“There is no run-rate that is high. It boils down to how well the opposition bowlers execute. So seven, eight, nine, 10 (run rate) doesn’t matter. What matters is keeping your calmness.”

Well, the crux is that all that ends well defines the best. We believe that Dhoni is indeed the best and there’s no match to perfection. We bow down in all respect to M.S Dhoni.

Aarti Had The Most Romantic Anniversary Wish For Sehwag! His Reply Was Equally Romantic!
Harsh Goenka Takes A U-Turn Praises Dhoni For His Last Ball Finish! Twitter Users Slam Him