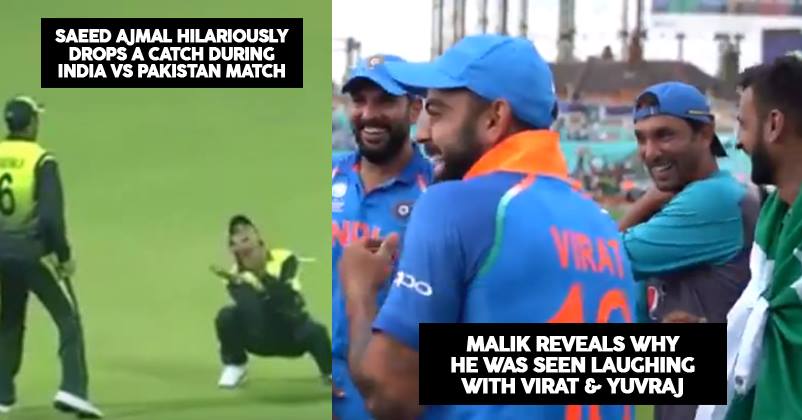 Who can forget the terribly hilarious situation, Shoaib Malik and Saeed Ajmal found themselves into by skipping a catch last year during ICC Champions League? It was the match between Pakistan and West Indies and the formers got a chance to send Chris Gayle back to the pavilion by taking an interesting catch. However, the situation got out of their hands miraculously and it’s still remembered by everyone.

After the match, Shoaib Malik was seen laughing with Virat Kohli and Yuvraj Singh.

Click Here to watch the video directly on ICC.

During a recent interview at the Voice Of Cricket show, Malik revealed the whole incident clearly; how was the catch skipped and what were Malik, Yuvraj and Virat discussing while they were laughing.

Malik said that when the match ended, Virat asked him what did Ajmal said after skipping that catch and how he then narrated the incident to Virat and Yuvraj. Malik said that he asked Ajmal that you skipped the catch and that too of Gayle but when you had taken the position, why did you withdraw? Ajmal told him that he was in the position to backup Shoaib. He wanted to take the catch in case Shoaib skips it. After listening to Ajmal’s answer, Virat and Yuvraj burst into the laughter. You can watch the video bit from the interview below-

In the latest episode of Voice of Cricket @realshoaibmalik joins @ZAbbasOfficial and narrates what Saeed Ajmal said after the dropped catch, his last wish before retirement, what Sialkot Stallions means to him and much more!
Watch the full episode on YT: https://t.co/VEDTaULMm0 pic.twitter.com/dtB5DIxQEW

Congress Made A Big Mistake While Congratulating Team India, Got Trolled Like Never Before
Pakistan’s Azhar Ali Thought He Hit The Four But Became A Run Out. Watch The Hilarious Video