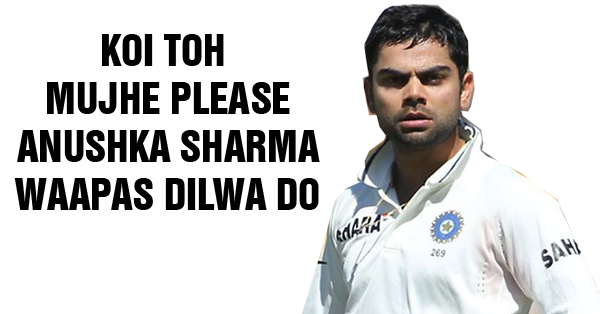 The breakup of Virat Kohli and Anushka Sharma has come as a shock to everyone. Surprisingly, the year 2016 is considered to be the year of Bollywood splits, with popular breakups of Ranbir-Katrina and Farhan-Adhuna. However, as compared to other affairs, the love story of Virat-Anushka is characterized by a small twist. Confused? Continue reading! Virat and Anushka have parted ways, but a source close to Virat stated that Kohli hasn’t been able to get over Anushka. If sources are to be believed, Virat is trying hard for wooing Anushka back. Certain issues were responsible for the breakup of Virat and Anushka. Virat wishes to marry Anushka, but she isn’t ready for marriage. The source revealed that they both are committed to each other, but marriage is a NO!
Further, the source added that Virat still loves Anushka and wishes to get back with her. On the other hand, Anushka has kept herself busy with work and is shooting for Sultan. However, the actress is quite dignified about this split with her boyfriend but isn’t ready to reveal any details. In fact, she refrains discussing about Virat and things related to him. Does it mean that the couple is reconsidering their relation again?

The Reason Why Hashim Amla Refused To Give Interview To The Journalist, Will Leave You Shock?
Glenn Maxwell Gave Kickass Reply When Fan Trolls Him On Twitter