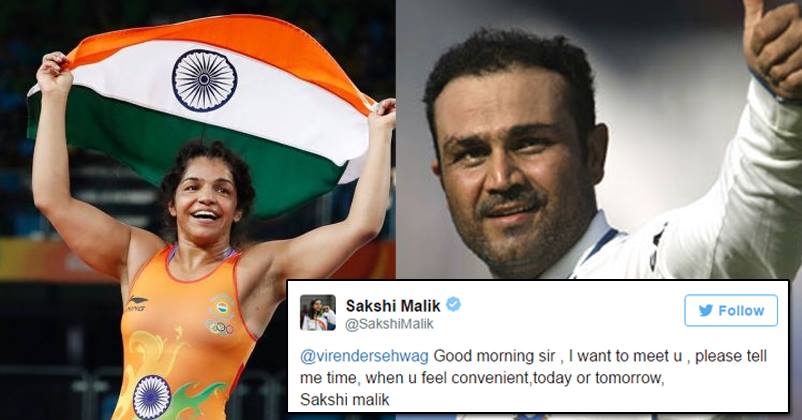 We know how many tantrums stars can throw? And, also how all fans abide by that. Something similar happened with new star of India, who brought marvel for India in Olympics. Sakshi Malik who saved India’s repute in Rio and brought home a bronze medal, requested to meet Virender Sehwag. Interestingly, Virender Sehwag was quite active during the Olympics and was all praises for the girls who made us proud. Recently, Sakshi Maliktweeted to The Nawab of Najafgarh, Virender Sehwag about her desire to meet him, and in no time he agreed but putting one terms & condition on table.

@virendersehwag Good morning sir , I want to meet u , please tell me time, when u feel convenient,today or tomorrow,
Sakshi malik

And, being the sarcastic tweetaratti that Sehwag is, he promptly replied with this tweet

Sure ,will let you know the time. Hope you won't start wrestling with me, Sakshi ☺ https://t.co/XTau8YTnEd

Well, we hope you haven’t forgotten the tweet which Shobha De made regarding our Indian Athletes in Rio Olympics.

Here’s the tweet which made Shobha De, a Villain overnight.

Goal of Team India at the Olympics: Rio jao. Selfies lo. Khaali haat wapas aao. What a waste of money and opportunity.

During this time also, Virender Sehwag was the one backing our Indian Athletes, and when Sakshi Malik adorned the bronze medal he was indeed very happy and tweeted a picture of her, basically giving Shobha De a tough time (this was posted by Sehwag’s fan & then retweeted by Sehwag)

Well, it’s time we give Virender Sehwag the crown of being Chandler Bing of India. He can take a dig so well.

Now, all that we are waiting for is to see a picture of these two marvels together.
A man who’s opening made a change in Indian Cricket and a woman who made everyone watch wrestling instead of cricket.

Continue Reading
You may also like...
Related Topics:sakshi malik, sehwag