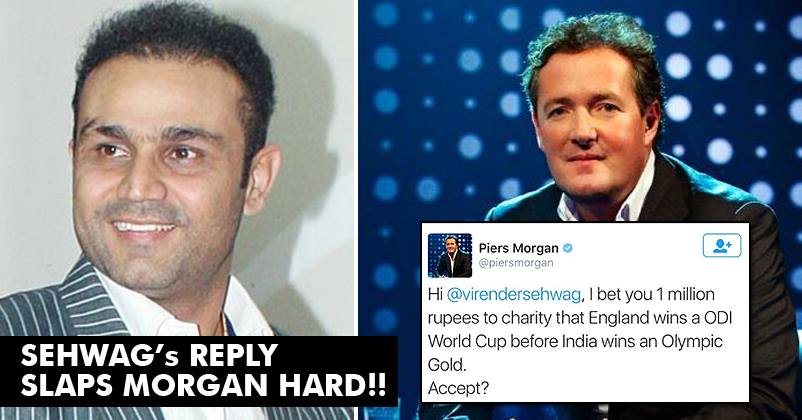 Virender Sehwag’s Twitter account is a perfect example of ‘Wit’ and ‘Smartness’. Yes, in case you miss Sehwag on field, you can easily go to his Twitter account and enjoy his hilarious tweets. Since a long time now, Sehwag is pretty active on Twitter and he is known for his funny yet meaningful tweets. Yesterday, Piers Morgan, the British Journalist had challenged Viru and this bet was worth ‘1 Million Rupees’! Here’s it! Everyone was eagerly waiting for Virender Sehwag’s tweet and yes, he finally spoke! Although he didn’t reply directly to Morgan’s tweet, he posted one on his own account. His tweet seemed to be an indirect way of taking a dig at Piers. Here’s it!

Some people's fortune is so bad, that
Apply Apply,
But No Reply ..
Hahahaha

Virender paaji always replies in style, don’t you agree? But once again Piers tried to provoke him with his new tweet; here’s it… .@piersmorgan India Already Has 9 #Gold Medals, England Has Zero WC.
As Far As Charity Is Concerned, You Already Owe Us Kohinoor. #ENGvPAK

After this tweet, Piers deleted his earlier tweet and replaced it with a new one. Here’s it…

Hi @virendersehwag, I bet you 1 million rupees to charity that England wins a ODI World Cup before India wins another Olympic Gold. Accept?

Yes, it seems that Morgan had forgotten about India’s 8 gold medal wins in Hockey and Abhinav Bindra’s gold win at Beijing Olympics, making it 9. People trolled him for not knowing even the basic facts, before throwing a challenge! We don’t know what pleasure Piers is getting in provoking Sehwag, but Viru Paaji is not going to bend down so easily! He will keep taking indirect digs like this. Well, what do you have to say about this? Do let us know your thoughts in our comments section below!