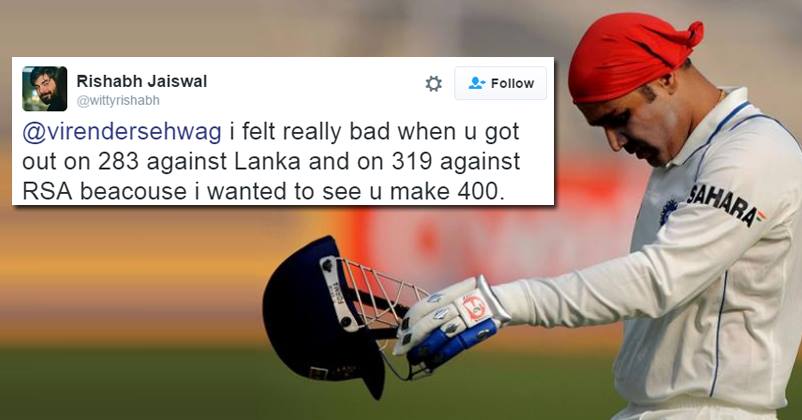 Virender Sehwag, the former Indian batsman is one of the most active social media users in the sports world. Sehwag continues to entertain his fans, not by his batting, but through his epic tweets. Every now and then his epic tweet or a hilarious troll from the former India batsman pops up and gets viral on the internet. It is often said that half knowledge is more dangerous than ignorance. This is what happened when Virender Sehwag trolled a fan in the most epic way who failed to get his facts right. This is not the first time that Sehwag has trolled someone on the twitter. British journalist and television personality Piers Morgan tried trolling Virender Sehwag, but he failed big time. Sehwag is very active on the twitter, he uses the platform to connect with his fans, express himself, but most importantly to entertain everyone. This former Indian opener Virender Sehwag has won the internet with his funny sense of humor. There is not a single day when Viru fails to entertain with his epic sense of humor on twitter.

Virender Sehwag trolled a fan in the most epic way who failed to get his facts right and tweeted him to attract his attention.

The fan acted as if he’s a big sehwag fan, he tweeted to Sehwag expressing how disappointed and bad he felt when Sehwag was dismissed for 283 runs against Sri Lanka as he wanted him to score 400.

A few hours later Virender Sehwag replied to his tweet.

It was the 3rd Test between India v Sri Lanka at Mumbai (BS), which happened between 2-6 Dec, 2009. MS Dhoni led team India, India posted a gigantic score of 726/9 on the board. In this match Virender Sehwag scored 293 runs. Here’s a piece of advice for everyone who’s on twitter, don’t try to troll Sehwag, and if you’re fan who wants a reply from him, then you better tweet him sensibly and always have your facts right.

So guys what do you think about the trolling skills of Virender Sehwag? Share your views and opinions in the comments!

Acche Din For Mobile Users – Vodafone Investing Rs 20,000 Cr To Compete With Jio!
The Reason Why Paralympians Are Shaking Their Medals!