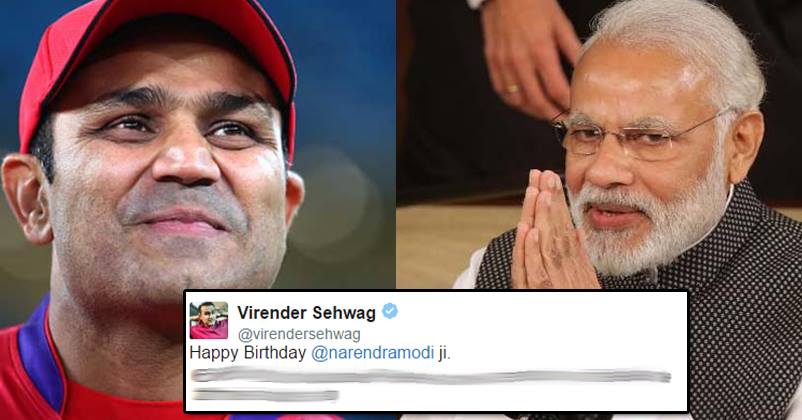 Our Prime Minister Narendra Modi is celebrating his 66th birthday today. He started his day by meeting his mother Hiraba in Gujarat. He’ll be attending the various events in the state. People across the country and all over the world are celebrating the PM’s birthday. Narendra Modi’s birthday is being celebrated as the ‘Sewa Diwas’ because he has spent most of his life in the service of the nation. To celebrate Modi’s birthday a cake weighing 3,750 kg has been specially prepared. This is made in an attempt to break the world record. From the ministers to the Bollywood celebrities, and his millions of followers, everyone is wishing him a very happy birthday in their own unique way. Most of the people took it on the micro-blogging site Twitter to express their love and give him warm birthday wishes. Some of them are absolutely worth reading because of the emotions and feelings involved in the writing.

Virender Sehwag, the former Indian batsman, is one of the most active social media users in the sports world. Former Indian opener Virender Sehwag was one of the first persons to wish Prime Minister Narendra Modi a very happy birthday on Saturday. Virender Sehwag took to micro-blogging site Twitter to express his heartfelt gratitude to this great leader. Sehwag said that Modi’s “humility, time management, oratory skills, detailing & enthusiasm defies age” and is “inspiring”.

Happy Birthday @narendramodi ji.
66 not out Mubarak.Please score a century in ur life&also make this India's century pic.twitter.com/2ZClCqeYWb

Not only this former Indian opener greeted Modi, but also prayed for Modi’s health, and hoped that the PM will get the required support from his colleagues and countrymen in making India a superpower.

People can also directly wish him using a special feature of the Narendra Modi App. People who have known Modi for long, his colleagues, his co-workers highlighted his “qualities of leadership, attention to minute details and of being a good listener” on his birthday.

The talented Indian spinner, Ravichandran Ashwin, celebrates his 30th birthday today and he has received wishes from across his fans and followers across the fraternity. Virender Sehwag wished Ashwin in his own vintage style. Sehwag wrote:

Happy Birthday @ashwinravi99 .May u keep on tumbling more records
Do full on'Ash'today,long season coming, there u will 'Win'#ShaatirPlayer