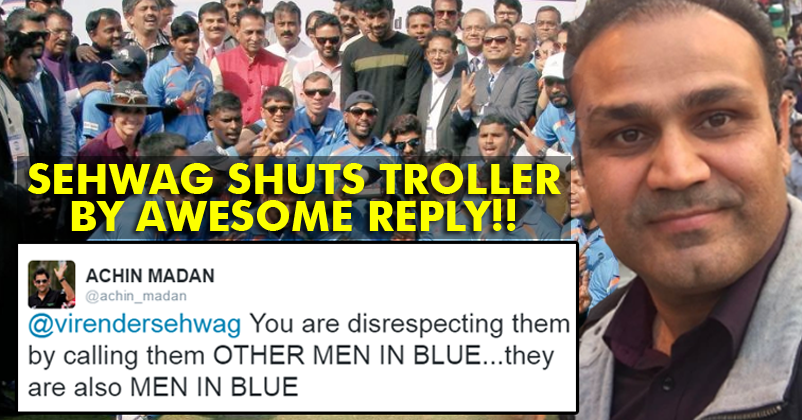 The Sultan Of Multan has been as flamboyant on twitter as he used to be on the cricketing field. Be it his epic birthday wishes or his hilarious one liners, Sehwag has struck a six on Twitter with almost every tweet. He trolls anyone and almost everyone he wishes to and gets loved by the twitteratis for his sense of humor.

More recently though, Sehwag was at the receiving end of some harsh criticism for his tweet on the Indian Blind Cricket Team. After they defeated arch rivals Pakistan comfortably by 9 wickets in the final of T20 Blind Cricket World Cup, Sehwag made a congratulatory tweet that didn’t go down well with the twitteratis. He was criticised for using the Hashtag #OtherMenInBlue for the Blind Indian Cricket Team.

This is the tweet from Sehwag that wasn’t very well received by the twitteratis!

Congratulations to our #OtherMenInBlue on winning the T20 World Cup for the Blind. They have lit up smiles for a billion people. pic.twitter.com/sEZiz2mXxU

Twitteratis were furious at Sehwag for referring the Blind Indian Cricket Team as the ‘Other’ men in blue! Here is how they started criticising Sehwag!

first of all they not othermeninblue they are also men in blue 💪🏼 n we r proud of them !

A twitterati went a step ahead and reminded Sehwag that the Captain of the team was also not happy at the reference and thus Sehwag wasn’t right!

Reddy has a point, @virendersehwag! The team led by Kohli won't be called 'other', right? https://t.co/RFyaPTLPMJ

Sehwag couldn’t take it anymore and decided to shut them up with his reply!

. @GauravPandhi Better do some research before commenting.But research &media/you don't go hand in hand.It is their official campaign theme. pic.twitter.com/LplsoeZATf

Indeed Sehwag has been absolutely spot on when it comes to shutting up his haters and this time too wasn’t any different. His wishes didn’t go down very well but his passion for country’s cricket did. Do let us know your views about this victory of the Blind Cricket Team and Sehwag’s wish for them in our comments section below.

Finally, The Wait Is OVER! Sachin Tendulkar Took To Twitter & Announced The Release Date Of His Biopic!
Ajay Reddy, Captain Of Blind Cricket Team Slams Media For Twisting His Statements About Sehwag!