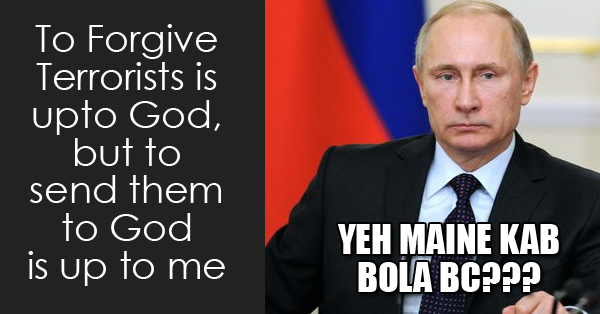 Vladimir Putin, President of Russia has always displayed an image of tough guy whether it may be remarks about public issues or going shirtless. These things by Putin always were on the headlines of every news source across the globe. Recently a similar kind of incident took place with the Russia’s macho man and the President Vladimir Putin, as he was attributed with the following rock solid quote against Terrorists “To Forgive Them is upto God, but to send them to God is up to me.” This quote took fire rapidly and was trending on every social media.

Actually Vladimir Putin has never said that statement. It was posted by a Russia Today anchor Remi Maalouf on Twitter after the tragic Paris attacks in which more than 100 innocent people were killed by terrorists.

Varney & Co of Fox Network has shared screenshot of the Tweet posted by Remi Maalouf and this made a spark among the citizens of USA and tweets started criticizing Obama.

This is the danger of social media! I took Putin's quote from a post on Facebook & it turned out to be false. I apologize.

Even though he didn’t say it. I wish Vladimir Putin will do this someday.