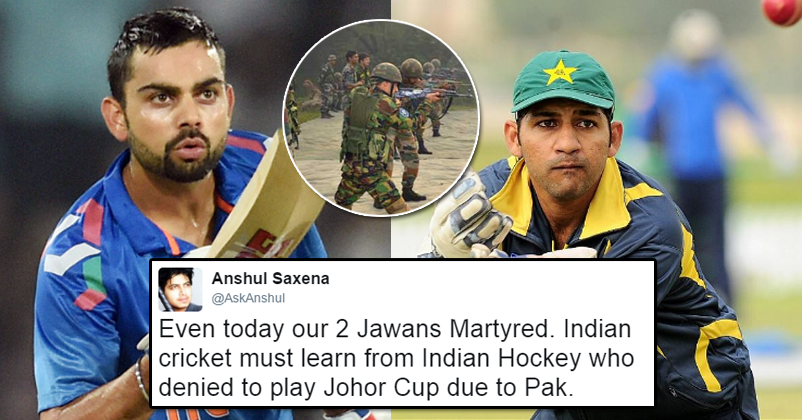 The action between India and Pakistan has already started. The whole country is watching and was very excited about it. But we are here with the other side of the story. Not everyone wanted this match to happen. Yesterday, Twiteratti requested team India to walk out of the match and hashtag #WalkOutFromPakMatch is trending on this micro-blogging platform. Read the complete article to find out why.

According to Twitter users, country comes before cricket and Indian Cricket Team should not play any match with Pakistan until situation at LOC is neutralized. They requested Virat Kohli to boycott the match by arguing that they play for the country, and not BCCI.

People pointed out the mutilation of Indian Army by Pakistani Army and asked to support the Indian Army by not playing the match. The said that they will be happy to watch India win, but they would be proud to see them walk away in support of the Army.

Here’s what he tweeted.

An appeal frm hardened SOLDIER 2 our "Heroes of Playground"@imVkohli @msdhoni U r requested to b a ROLE MODEL in this critical situation🇮🇳 pic.twitter.com/IJbLBWLr8S

An appeal frm hardened SOLDIER 2 our “Heroes of Playground”
@imVkohli @msdhoni U r requested to b a ROLE MODEL in this critical situation??

Interestingly, no bilateral series were organized between the two nations and they have faced each other only in International matches. Pakistani players were discontinued in IPL matches from 2009, following the Mumbai attack.

Although there were strong support to #WalkOutFromPakMatch, some people suggested that walking out from the match is not a solution. We have collected some of the tweets.

Here are the tweets.

My request to Lieutenant Colonel @msdhoni ..
Why play match with the Nation who kill our Army men ??#NationFirst #WalkOutFromPakMatch pic.twitter.com/Us6MjMx9et

We should stand with our army in every possible way. Why to make a tie towards pak? Do they deserve? #WalkOutFromPakMatch

Walking out of match will send a more powerful message than winning it even by 10 wickets. Stand up for your army.#WalkOutFromPakMatch

Even today our 2 Jawans Martyred. Indian cricket must learn from Indian Hockey who denied to play Johor Cup due to Pak. #WalkOutFromPakMatch

This is one match you can win without playing.

Give them the finger and walk out of the field.#WalkOutFromPakMatch

@imVkohli n co winning will give joy but

My heart will swell with pride if they walk out of ground refusing to play#WalkOutFromPakMatch pic.twitter.com/SmfitJLZpN

What a sight it can be if Team India finds the heart to stand with Indian Jawans#WalkOutFromPakMatch pic.twitter.com/ehvimLOqpy

While Indians want to see Pakistan defeated, they also want to stand with our Jawans. It is up to you to decide if India should have walked out of the match or playing it was the right decision.

This was all about the issue. Do let us know your opinion in the comments section below.

Virat Kohli Has Stopped Endorsing Pepsi & The Reason Will Make You Respect Him!
You Must Have Noticed Bat Sensors In This Champions Trophy. The Idea Behind Is Pure Genius