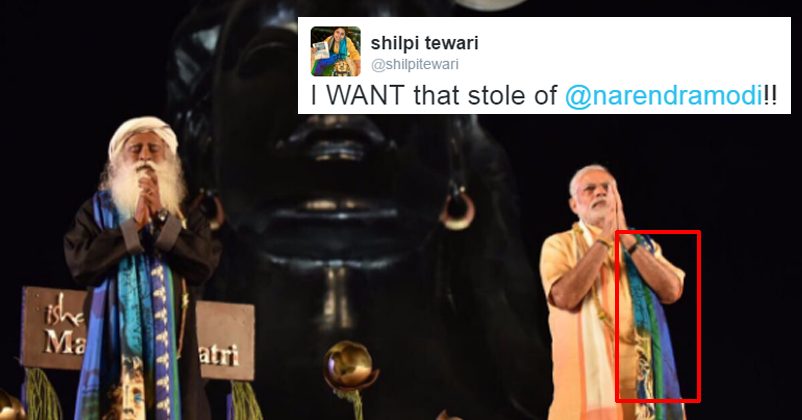 On the eve of Mahashivratri, PM Modi unveiled a 112 foot tall statue of Adiyogi Shiva at Velliangiri Mountains’ Isha Foundation. As always, he emphasized on peaceful coexistence and we surely agree with him, isn’t it?

This is considered to be the tallest statue on the planet and the main intention behind making it was recognizing the contribution of Yogi to humanity.

During the event, Jaggi Vasudev, the founder of Isha Foundation gifted PM Modi a greenish-blue stole which had Adiyogi’s face printed on it. No doubt, the stole was very attractive and it immediately captured attention of everyone present there. While performing the aarti, Shilpi Tiwari, a Twitter user tweeted to PM Modi and expressed her wish to have that stole which he had draped.
Check out her tweet…

I WANT that stole of @narendramodi!! pic.twitter.com/fGywtkAFXC

However, she was surprised to know that her tweet didn’t go unnoticed. Yes, PM Modi heard Shilpi’s voice and made sure she gets the stole.

On 25th of February, Shilpi received the stole she wished for; not only that; PM Modi also sent her the print out of her tweet, which had his autograph.

Shilpi was overwhelmed by this gesture and once again she took to Twitter to share her gift from the Prime Minister;

Overwhelmed to receive blessings of Adiyogi from modern India's Karmayogi, PM @narendramodi, who is covering miles daily yet hears us all! 🙏 pic.twitter.com/QoT2pF6kK7

PM Modi sent me this blessing!

PM @narendramodi sent me this blessing because I had tweeted yesterday that I want this stole. Am I dreaming??https://t.co/nSoxL0Cbbm

A signed paper too!

Along with the stole came this signed paper .. can you imagine a PM who listens to your voices and takes time to respond & personalise !! pic.twitter.com/epIuftIpfz

This was definitely a great gesture, isn’t it? This shows how courteous he is and how eager he is to fulfill the wishes of his followers.

What’s your take on this incident? Do share your views in our comments section below.

Steve Jobs Never Had A Number Plate Behind His Car & How He Managed To Drive Is Pure Genius
This 8-Yr Chinese Girl Has Been Selling Veggies On Street For 5 Years! Reason Will Make You Cry