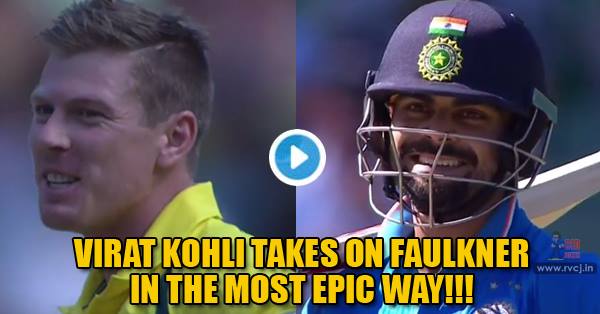 Indian cricketer Virat Kohli doesn’t miss any chance to counterblast his opposition if the opposition targets him and the same happened in 3rd ODI on 17th January, Sunday, at Melbourne Cricket Ground against Australia.

When Virat broke the batting record of AB de Villiers, it’s an instant when he got back at Faulkner saying “have smashed you”.

Batting on 72, Virat played James’ 4 dot balls in the innings’ 35th over and when he took a single on 5th ball, James said something to Virat and we know that this cricketer of India is not the one to back off and replies aggressively and that’s what he did here too.

Few words had been exchanged by both the cricketers and this is what could be got from Virat’s stump microphone, “I have smashed you enough in my life. You are wasting your energy.” Not only this, they said few other things too; nevertheless, they could not be heard.

Dean Jones and VVS Laxman were making commentary and the duo also admitted of “something happening” between both the cricketers.

Watch the video of the incident:

Don’t forget to share your views with regard to this in the comments section below.