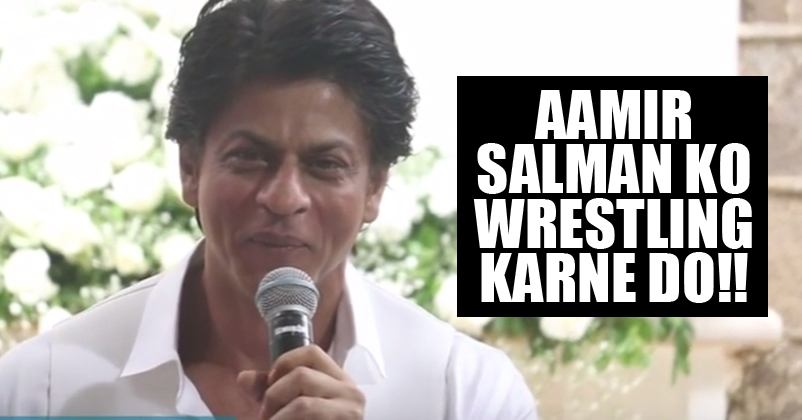 Bollywood superstar Shahrukh Khan held a conference at his residence Mannat, Mumbai where he addressed the media personals and wished them good health on the occasion of EID.

He was wearing white Kurta Pajama in all his charm. While addressing media, he answered many question which were quite a bit witty in nature. One such question was asked by a fellow reporter regarding his take on recent movies that his colleagues were doing on the topic wrestling. Salman Khan’s new movie ‘SULTAN’ had an opening of 36.7 Crores on the first day itself and Shahrukh Khan did congratulate Salman Khan on his film’s recent success. Whereas Aamir Khan recently launched his new movie ‘DANGAL’s poster which set the whole industry buzzing about his new movie.

Shahrukh Khan was quick to react on this question and jokingly replied that it’s better to let Salman Khan and Aamir Khan handle wrestling, they are enough for this. And also humorously mocked himself by asking the reporters to have a look at him and give a thought about his body, does it really looks like a wrestler’s body ? He later added that he is a romantic actor and has no idea about wrestling.

Here is a video clip of him giving the statement ! !

With two of the Khans exploring the “wrestling” genre, there were speculations that Shahrukh Khan would also come up with such kind of a movie.

Salman Khan’s ‘SULTAN’ and Shahrukh Khan’s ‘Raees’ were expected to lock horns at the box-office this Eid, but this was averted as the release of Raees was pushed to next year after Shahrukh Khan suffered some injuries.

Raees is directed by Rahul Dholakia and produced by Gauri Khan, Ritesh Sidhwani and Farhan Akhtar under the banners of Red Chillies Entertainment and Excel Entertainment. It also stars Nawazuddin Siddiqui and Mahira Khan.

This MTV Roadies Winner Suffered From Cardiac Arrest! Death Was So Damn Close!
So Did You All Enjoy ‘Sultan’? Well, There’s A Super-Duper News For All Of You