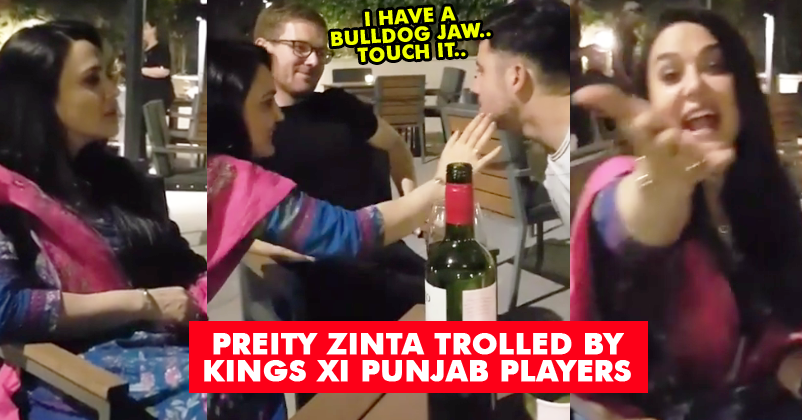 Kings XI Punjab is performing really well in this season of IPL and so, the team owner Preity Zinta is in a happy state. Players of the team are also bonding amazingly with each other.

Recently during a casual dinner, some players of Kings XI Punjab played a prank with Preity which was quite a fun. So what happened was Darren Sammy, Marcus Stoinis, Eoin Morgan and Matt Henry were having dinner with Preity Zinta. Marcus Stoinis said he doesn’t have a human jaw but a dog’s one which he got operated on. Now this, of course, surprised Preity. Eoin Morgan and Matt Henry joined the prank and increased the authenticity of Marcus’s words with their affirmation. Eoin Morgan did a little bit more by even touching the jaw of Marcus and behaved as if it was indeed like a dog’s one. Meanwhile, all this was being captured by Darren Sammy on his camera.

To make the prank more funyn, they convinced Preity to feel the jaw herself by touching it. Now as she leaned to feel the jaw with her hand, Marcus grinned like a dog, giving a shock to Preity who was totally taken aback but soon burst into laughter when she realized the prank.

The prank video was later posted on Instagram by Darren Sammy.

We all love watching these players perform on the field but it’s, even more, fun when we see them bonding like this. IPL’s best quality is that it brings the players of all nations together. It’s heartening to see that they are together even off the field.

What do you think about it? Tell us in the comments section.

Dhoni Does It Once Again! He Perfectly Hits The Stumps & Gets The Applauds He Deserves!
Archana Vijaya Reacts To The Viral Pic Of Kohli Looking At Her Legs! Here’s What She Said!