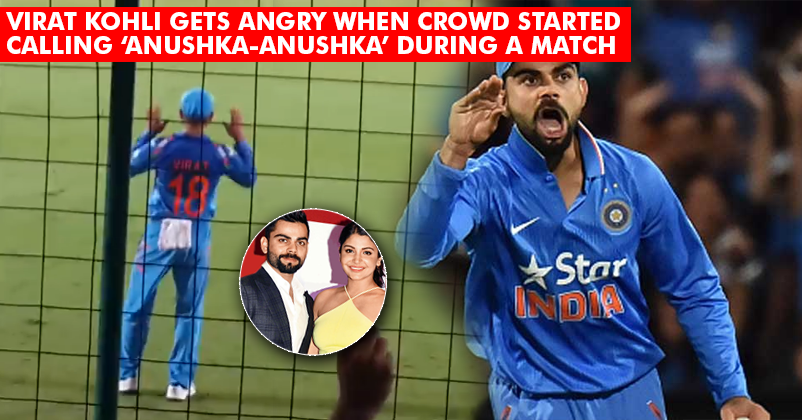 Love is beautiful. But just like a rose comes with thorns, love comes with complications and side effects. We all know how deeply Virat Kohli is in love with Anushka Sharma and it was visible even before the couple made it official. Even though Virat has been a very strong performer for Indian Cricket Team, his few bad performances attracted a lot of criticism because fans thought Anushka is the reason that he couldn’t focus on the match.

Now it seems the name Anushka to Virat has become just like a name Heer to Ranjha. People just can’t take their name in a different breath. In a match between India & West Indies, the crowd started cheering Anushka’s name when Virat Kohli was fielding on the boundary. You will think that Virat must’ve got angry there, but the man maintained his calm and instead hinted the crowd to use the right name by pointing towards the back of his jersey. With this unexpected reaction from Virat, they couldn’t hold the excitement for long.

Now that’s what we say, doing it the right way. Besides that Anushka & Virat are really a lovely couple. It’s a treat to see them together always. We wish they get hitched soon because the relation is already on a level where they are seen wearing common jacket. LOL.