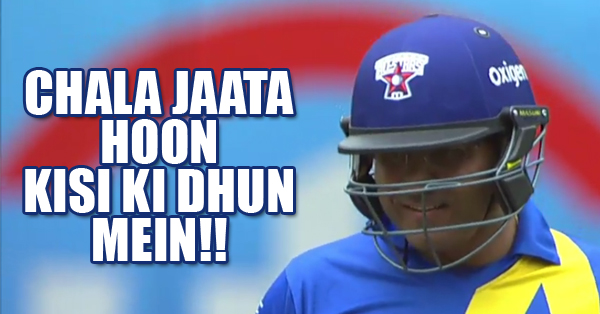 He smashed a massive total of 55 from just 22 balls. He was on a roll yesterday and was fully set to chase down a big total of 263 and he was then caught on camera while he was singing the song “Chala Jata Hu Kisi Ki Dhun Mein” a Classic Hindi song. Also he is known for singing while batting, this is not the first time he was singing, he does that very often.

He’s an opener for the team and he bats having no pressure at all we all have seen his epic batting style. He stays calm always Maybe singing a song does a work for him to keep him calm. He holds deep roots in the game of cricket even being at higher age, he holds a big experience and he is retired from International cricket. However, he has been criticized many times for his poor performances and also, he showed the whole world his abilities.

What Made Sachin Tendulkar So Angry?
Incredible Message From Indian Soldiers For Those Who Think India Is “Intolerant”