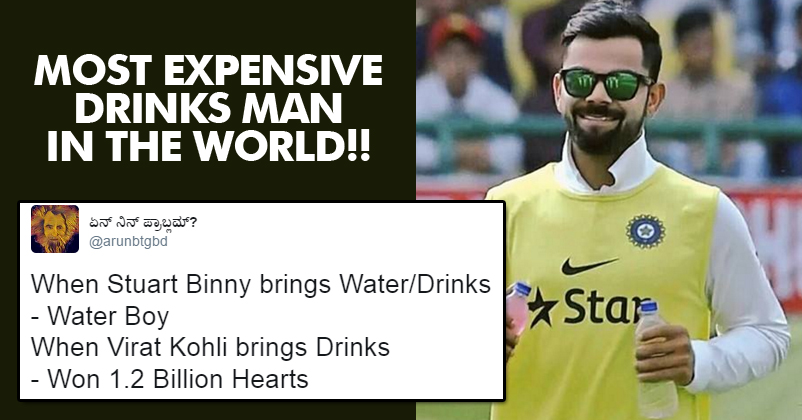 Virat Kohli, the man of the match, not just one but every match. He is the cricketer, whose presence is a charm spell both on field and off it.

Virat Kohli’s latest impromptu act of kindness for his teammates made the crowd go a little more mad for him. If you’re wondering how has he won our hearts,even after not playing in it, then you must read further.

We all know Virat Kohli opted out of the Australia Dharamshala test match because of serious shoulder injury,but that did not really keep the cricketer of his duties. Virat became the water boy for his teammates. He was seen coming with refreshments and water bottles for his team members.

As soon as the crowd saw Virat Kohli, there was loud cheers, whistles and they all were shouting ‘ Most expensive water boy’ for the cricketer . Here’s a video proof, watch it right here:

The Twitter also couldn’t help but fall for his charms:

When the girls fall for his cuteness

Did anyone know about this?

Then Sachin Tendulkar was carrying drinks for his team mates in Bangalore Test v AUS. (in2004) (due to tennis elbow)

Sports is all about great sportsman spirit

This commitment from Virat the only highlight of the first session for India.
Good batting track but Aus helped by wayward bowling.#IndvAus pic.twitter.com/dNYlWe11Sq

Because he deserves it, isn’t it?

The loudest cheer you've ever heard for a man running the drinks https://t.co/owfbADiok9 #INDvAUS pic.twitter.com/zmPPA7rgMq

The achievements of the water boy

Stat: No other water boy in the world has scored 10000+ international runs.

Passionate and intense in everything he does

Loving the intensity of @imVkohli and his desire to be in the middle in any form to involve in game.#dharamsala #IndvAus pic.twitter.com/yr2OZ56jes

We wish we too had such hot water boys #Relatable

What do you guys feel about this new role of Virat Kohli? Let us know in the comments section.

World’s Second Fastest Bowler Gets Indian Citizenship. He Can Play For India In 2020!
Comedy On Field! Watch How Australian Skipper Changed His Expressions After Doing This Mistake!