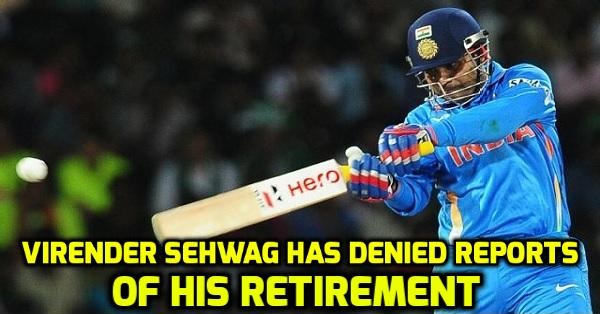 Yes! You read it correct.

It was some time back when the news shocked the cricket world regarding the retirement announcement of legendary, Virender Sehwag, at Dubai. If the latest reports are to be believed, Virender Sehwag denies these reports of any such retirement and titled them to be rumors. He said he only hinted for retirement to participate in Masters Champions League (MCL), a UAE-based Twenty20 tournament. MCL tournament can only be played by players who are retired from international cricket. Sehwag, who was present alongside Brian Lara, Graeme Smith and Azhar Mahmood at the launch of MCL, was asked how he could play as MCL is a retired cricketers’ league, Sehwag said “If I am not retired I will not play. I will go back to India and announce my retirement.” The statement was misinterpreted by all news channels and it was assumed that the Legend has announced immediate retirement. But good news for his fans that this wasn’t correct and he has not announced his retirement yet.

Being the only Indian cricketer to score a triple-century in a test match, he won the hearts of millions in the nation. He continued, and gave another round of triple-century to the team in  another test match.

He started his career in international cricket from ODI way back in 1999 and moved up to the test team in 2001.

He broke the stereotype of how openers start the innings, by taking the strike rate to 82.23 as highest opener strike rate of a cricketer ever in the history.

As the retirement rumors came in, his followers and fans couldn’t just resist from sharing their moments and poured in with all the love and respect.

To start with, this is what Harsha Bhogle has to say..

You were like no one else that played the game @virendersehwag. And that is why you were special. Everytime we think of you we will be happy

Known to be the best batting order ever:

Even Kamaal R Khan tweeted on this:

One of the most feared batsman in the world of cricket bids his goodbye to the game. What a career, what a player! #ThankYouSehwag

Tendulkar, Dravid, Ganguly, Laxman and Sehwag. End of an era.

We hope to see him on the field for many more years to come.

Source: The Times Of India

Continue Reading
You may also like...
Related Topics:sehwag, virendra sehwag