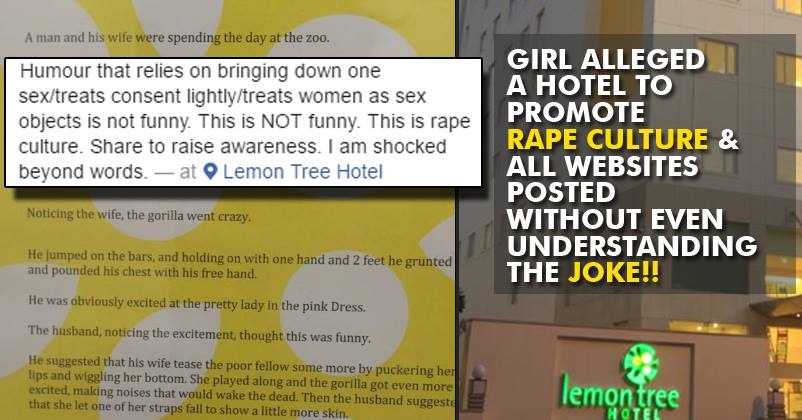 It is easy to dream about being a journalist, it is easier to pretend like one but it is not that easy to nurture your mind just like how REAL JOURNALISTS do. Having a pen & paper or camera & mike or in short a handy Internet connection with some self oriented and fabricated theories are good enough for your article to get published on websites and this is all that you need to check into your Facebook account as ‘JOURNALIST AT ANY_RANDOM_WEBSITE.COM’. I don’t want to sound like old dying uncle ben, but ‘With Great No. of Facebook Likes, Comes Great Responsibility’. When you know the fact that you serve as a news source and opinion makers for more than a million people, your personal opinions should never get into your way to portray the scenario in an unbiased manner. That is journalism 101 ! ! Count Arnab Goswami in exceptions, that guy is like the VIRAT KOHLI of Journalism. The incident reported in that article was based on a ‘Facebook Post’ posted by a user named ‘Anoushka Kapoor’. She uploaded a picture with a big description. Have a look.

Well, ‘humor’ is certainly becoming like electricity in India, not many people get it. This joke has been around in the air for more than a decade and none took offence and then this Lady found it offending. The joke is about a man who was irritated with his wife and finally dumps her into a cage having a Gorilla inside it. Read the joke written in the image below. This picture was shot in the bathroom stall of Lemon Tree Hotel in Bangalore.

But apart from Anoushka Kapoor’s facebook post, what was really saddening is how many News/Media Publishing Houses started to come out with similar articles without even thinking about it for twice. The writer of the very first article can certainly make mistake but it was hilarious to see the kind of blind following that the rest of the writers did for various websites. Following a Facebook post and writing an article over it without judging your own senses is very dangerous given the fact that millions of people follow your posts and your website for shaping their opinions.

The writer of that article wrote many important points which were worth appreciating and admiring but unfortunately she missed out the fact that the joke was not meant to promote ‘RAPE CULTURE’ in any manner.

Here are some points which I want to highlight in her article.

3. Are a person’s sexual desires foremost priority over the other’s health or comfort, consent be damned? – Again ! ! Where in the joke was it written that the husband wanted to have sex ?

Although we must appreciate that the questions which she raised need to be addressed and I as an individual completely stand with her on such topics. But holding discussions on serious topics like these in the midst of criticizing a ‘JOKE’ is in itself a JOKE.

If I try to be honest and ask myself a question that whether the joke was in a bad taste ? May be YES. But did it promote rape culture ? Cummon, it was just a JOKE ! !

Yes, husband asking his wife to pull off her strap and showing more skin to the Gorilla indeed showed his intentions to excite the Gorilla, but that doesn’t mean that the husband was trying to humiliate her wife by asking her to show more skin. Moreover it was joke which was supposed to take a drastic turn at the end. That’s how Jokes work. “The length of fabric on a woman’s body is not the measurment of her character.”

And which husband in the world takes his wife to a zoo just so that he can harass her for saying ‘NO to sex’ by throwing her in a cage having an excited Gorilla inside it. A very famous women empowering website wrote that such jokes dehumanises men and compares them to caged wild apes. Well, as a man I would like to say that I am not that weak to forget my basic gratitude behaviour under the influence of a JOKE and start comparing myself to a caged wild ape.

Another famous website quoted the whole incident by saying ‘The husband is ‘amused’ and eggs on the woman to pull the straps of her dress down and finally lift the skirt of her dress to further excite the gorilla. Because, you know, men will be boors’. Well, it is funny to see how a woman empowering article is generalizing all men under the category of BOORS. Is that how we plan to bring equality ? By bringing one community down, instead of helping the another community to rise up.

Here are some screenshots of such websites who took the offence ! ! It seems like buying offence is the most cheapest way to shop, as nowadays offences are sold for FREE. I just wonder where do all these rage, anger and offence go when movies like Ragini MMS 2, Great Grand Masti series and Kya Kool Hai Hum hits theaters where women are objectified in most pathetic manner. I have never read an article against such movies showing their disappointment but instead have seen many people sharing articles praising the revenue generated at the box office that weekend. Even our beloved comedian Kapil Sharma cracks sexists jokes on his wife, BUA and DADI. His comic acts does include BODY SHAMING but this doesn’t mean that he is promoting such social evils in any manner. It is just a comedy show with some jokes which are suppose to cheer up the audience.

Lighten Up people ! ! It will be great if topics like Marital Rape and Violence against women get addressed once again apart from broadcasting it only when some mishappening takes place. But it will be a JOKE if such topics start getting it’s breeding ground just through such Non Harmful jokes.

Auto Strike In Mumbai! Rickshawalas Will Suicide Seeing Reactions Of People On Twitter
Virender Sehwag Took An Indirect Dig At Piers Morgan With His Tweet & It is Amazing!