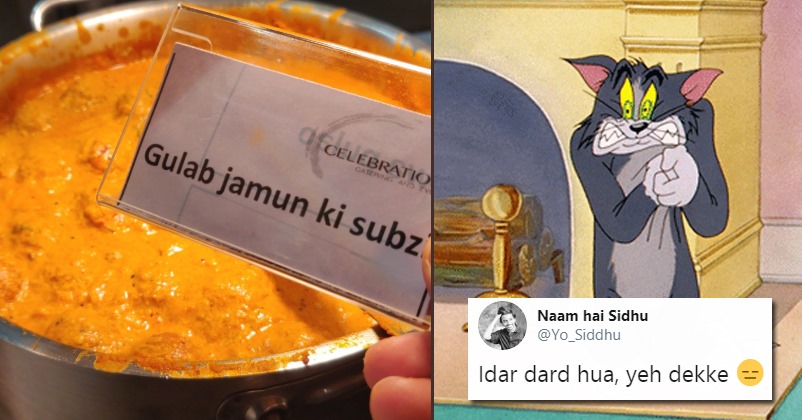 This might sound weird to you, and trust you are not the only one who went crazy reading the dish’s name. Twitter is going through a war over uncanny dish ‘gulab jamun ki sabzi‘ which was introduced by a twitter user to the online world. The world just got over the veg biryani debate and started a discussion about gulab jamun ki sabzi.

A Twitter user Harsh Mittal along with the picture of the dish wrote, “Every day, I lose my faith in humanity a little more.”

Every day, I lose my faith in humanity a little more. pic.twitter.com/WWEVNvzJLo

The moment the dish was uploaded on Twitter, the world went crazy. All hell broke loose and users started commenting about how freaking combination it is, sweet with tangy gravy.

This is wrong at so many level. 🤨 https://t.co/ybCa3FygQI

Can't imagine what it taste will be.. https://t.co/oT5hmFkkBH

How can I undo seeing this @IndianMale178 ?

It might seem weird but gulab jamun ki sabzi is a traditional dish of Rajasthan. If the gulab jamun balls are not put in the sugar syrup they are just spongy edible balls without any taste, ready to soak any flavor they are put into. Twitter users who have had this dish before came in to spread awareness about it and explained how its made and what it’s actually called.

It ACTUALLY was. I tweeted before having this.

Gulab Jamun ki sabji is very very common in #Jodhpur. My mother also cooks it occasionally and it is really very delicious. It is made by faded #GulabJamun. #AnokhaRajasthan

Don't go just by name, It's one of the most delicious veg dish you will come across. https://t.co/Sb0xiFg1S3

Chef should have informed him that it's better to be called Paneer Kofta.

I'm so outraged by this tweet and the number of retweets on this like do you people even know how it tastes or where does it belong to ? Did anyone of these people searched about this dish before judging it ?

It’s one of the most delicious sabzi made in Jodhpur, Rajasthan. The gulab jamuns are unsweetened and put in rich gravy.

Arre that's ok.. gulab jamun is sweet when we dip it in chashni.. without chashni..It's a nice spongy thing..We use that spongy thing to make sabji..It's a shahi sabji..Rich and delicious..👍

Not sure why people dunk on this. It's a thing. Go try gulab jamun ki sabzi and rasgulla sabzi in Pokar Sweets, Jodhpur. https://t.co/I76wJB4bxc

Anyone in the replies who have never tasted this and judging, this is rajasthani dish made of unsweetened gulab jamun and with rich gravy and taste really good. https://t.co/HnFX5wcWP3

This is actually something I've had before. It involves foregoing dipping the mawa balls in chashni and instead putting them in gravy. Tastes REALLY good. It's basically malai kofta, really https://t.co/uXL395eV7n

This is pretty common in Jodhpur, not only this but “rasmalai” too, they are super spicy and made in ghee. Try if u ever visit Jodhpur.