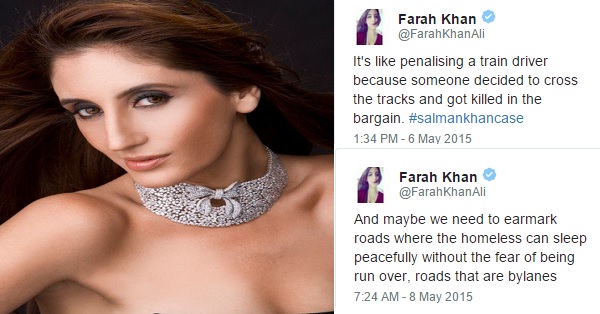 Farah Khan Ali who recently became the headlines of news channels and invited much criticism for her controversial tweets with regard to Salman Khan 2002 hit and run case can be considered as the Brainless Beauty. There is no denying the fact that she is quite beautiful, elegant and sophisticated, yet it would also not be wrong to state that she does not seem to use her brain while tweeting and it’s the result of the same that an FIR has been lodged against her taking into account the debatable tweets she made in support of Salman and against poor, homeless people.

Let’s take a look at those tweets which are to show Farah the way to jail:

And maybe we need to earmark roads where the homeless can sleep peacefully without the fear of being run over, roads that are bylanes

My intentions are clean &as long as God knows that I never said anything to mock poor homeless ppl that's all that matters. I rest my case.

However, later she apologized for her tweets by retweeting the following ones:

I realise the homeless have no place to go and so we need to be more sympathetic to them.

For each life is precious, be it anyone. Lives are lives and it is our duty as citizens to protect another life collectively as a society.

And so, I would like to offer an UNCONDITIONAL apology for my tweets ref the homeless sleeping on the streets.

Now let’s take a look at her gorgeousness and beauty which is clearly apparent in these lovely photos and for which she is referred to as Beauty Without Brain: What would you say about this beauty? Share your views in the comments section!

17 Good Morning Tweets Which Certify That KRK Is BRAINLESS
This Is How You Can Make This Mothers’ Day Your Mom’s Best Ever! Ever!