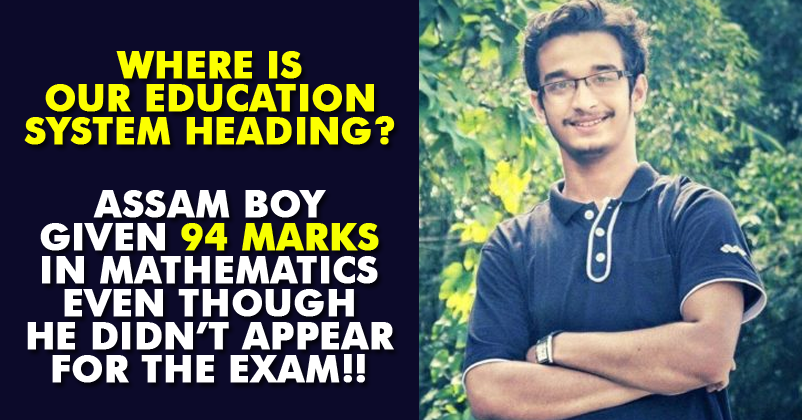 There have been a lot scams recently, regarding the results of various State Boards. Yet, we have something that is quite unheard of till date. The Assam Higher Secondary Education Council (AHSEC) declared the results of Class 12 on 29th May. Shockingly, a boy scored 94 marks in Mathematics, although he didn’t appear for the examination. With such good marks, he secured the 9th position in the region. Read the full article to know more.

We received this information from our source in Assam. Here’s what we know about him. Arnab Kapil, a science student from Guwahati Cotton College, which is one of the top reputed colleges in the region, secured the 9th position in Class 12 board exams. Arnab hails from Nalbari, Assam and he scored 473 marks out of 500. But he was shocked to see that he has scored 94 in mathematics, because he didn’t appear for this exam at all. He took maths as his fourth subject; it is not compulsory to appear for the fourth subject exam, as per the norms of AHSEC.

Yesterday, Arnab reached out to the council office of Assam and informed that he was awarded excess marks. We surely do salute his honesty, however, it is not right on the part of the council to be so reckless. Reports stated that another girl from Silchar experienced the opposite thing. She did appear for the maths examination, but her mark sheet stated that she was absent. After complaining, the board rectified the mistake and the girl secured the 6th position in the region. Our source verified the news about the incident but we couldn’t gather enough information on the girl.

We spoke to local TV channels and tried to contact the boy too. We will try to bring an exclusive interview with the boy on this issue, to know what he thinks about it. Meanwhile, the public of Assam is furious about it and questions are being raised on the council for being so careless

Here’s what a reporter had to say about it.

“We have seen such mistakes made by SEBA (Class 10th Board) before, but if AHSEC starts making such mistakes, it is unacceptable. They are risking the career of the students and it is their duty to be more careful on such matters. However, it feels great to see such honesty of a student. If he wanted, he could have got away with it. But we salute him for what he did.” We from RVCJ, salute the student for what he did and we feel that the boards should me more careful about such incidents, as there have been several controversies. Do let us know what you think about it in the comments section below.

Bhutta Seller Scores 87% In Class 10 Exams Despite Financial Burden! We Are Proud Of You!
India’s Rank In Women Workforce Among 131 Nations Will Disappoint You To The Core