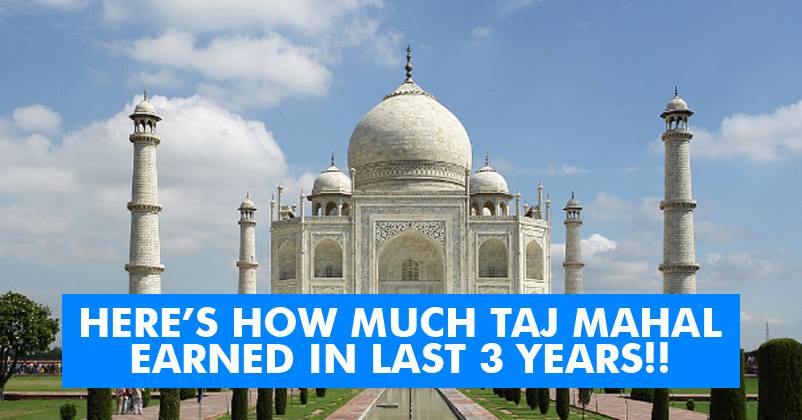 ‘Taj Mahal’, the most popular monument in India has done a good business in last 3 years, with paid services and ticket sales. You would be stunned to hear how much Taj Mahal has earned! Do you want to know? Well, this famous historical monument has garnered Rs 75 crores in last 3 years, isn’t it amazing? Moreover, Rs 11 crores have been spent on the conservation of Taj Mahal. Now, in a written reply in Lok Sabha, Mahesh Sharma, the minister of Union tourism and culture stated that in last 3 years, around 11 crores have been spent on conserving the monument, maintaining it and preserving it! He added that “75.91 crore have been earned from ticket sales and other paid services at the monument during the same period.”

This was an answer given to SP Muddahanumegowda, the Karnataka MP who wanted to all these details. Further he also sought details about ASI or the Archaeological Survey of India noticing discoloration of the marble. Then, the MP asked the steps that were being taken if discoloration is being noticed. Mahesh Sharma acknowledged that some discoloration of yellowing of marble is being noticed in some parts of the monument but it was owing to ‘Natural factors’.

He added “In order to maintain the original aesthetic appeal of Taj Mahal and to protect its marble surface, science branch of Archaeological Survey of India takes up cleaning process in a systematic and phased manner using appropriate conservation materials,”

So what do you have to say about these amazing earnings of Taj Mahal? Do let us know your comments in our comments section below!

10 Common Errors You Make In Your Resume
15 Astonishing Facts About Rajinikanth’s Kabali Movie.!!