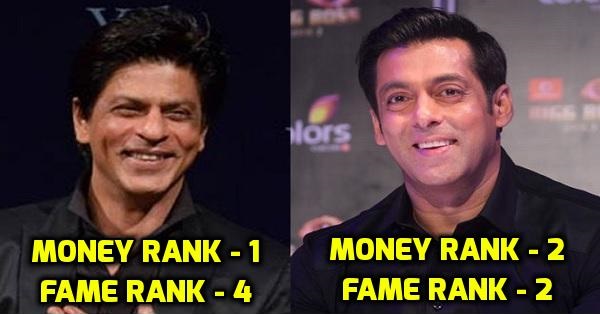 Even at the age of 50, Baadshah of Bollywood Shah Rukh Khan continues to rule the India’s Celebrity list. King Khan is ranked No. 1 in the Money Index and No.4 in the Fame Index by Forbes India. Shah Rukh Khan regained the top spot after losing to Salman Khan in 2014. With a whooping Rs.257.5 crores Shah Rukh holds 9% of the total wealth of the Top 100 celebrity list of Rs. 2819 crores. Speaking to Forbes Shah Rukh told that he opted out of one film a year thing and he promised to do 3 films a year. With Dilwale, FAN and Raaes coming up with just a few months gap we can expect SRK can master the 3 films a year also. Deepika Padukone is the only woman inside Top 10 of Forbes List.

However when it comes to Fame, Big B Amitab Bachchan is still the King, with 17.5 Million followers on Twitter making him the most followed Indian on Twitter. While coming to most liked celebrity, surprisingly Yo Yo Honey Singh tops the list with 28 Million Likes to his official page. Coming to the other 2 Khans, Salman Khan hold the second spot with Rs. 202.75 crores and for the first time Aamir Khan got into the Top 5 of Forbes 100 List. Aamir Khan who is at the 5th place has an earnings of Rs. 104.25 crores and a Fame Index of 7. Mahendra Singh Dhoni is the only sportsperson to be ranked inside Top 5. Most of the celebrities are a part of Top 100 list only based on their Fame Index even though their earnings are in the range of 1 to 7 crores. Dhanush (41 Ranks up), Rohit Sharma & Allu Arjun (38 ranks up) are major Rank gainers of 2015. This year’s list includes 14 debutants which includes Ravichandran Ashwin, Prabhas & SS Rajamouli while the latter two makes to the list just because of the Baahubali ‘s Success. List also includes All India Bakchod, Chetan Bhagat, Vir Das, Navjot Singh Sidhu, Mithun Chakraborty. While 19 people of last year’s list were unable to make it to this year which includes Shankar-Ehsaan-Loy, Sanjay Leela Bhansali and others.

These 15 Cute Photos Of RAKUL PREET SINGH Will Make You Fall In Love With Her!!
EXCLUSIVE BB9: You Would Never Have Expected This Contestant Evicted From Bigg Boss House