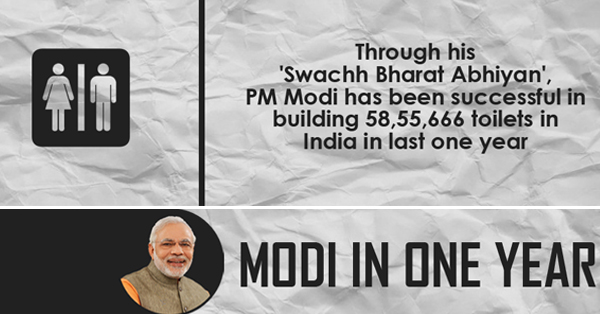 When MODI Speaks everyone Listens. An year ago this newly elected PM who had made the people of this Nation get up early in the Morning and watch DD National. He Roared like a Lion on that day. When he started Speaking everyone wanted to listen to him. On that day last year he had made a few promises to make India a better place to live in. Today an year after making those promises he made sure that he presents the report card of those promises made to the people of the nation last year. Let us have a look at what MODI has achieved for the Nation in the past one year. How many promises did he actually fulfilled and how many are yet to be looked out for. Though the year had been an Year of Hits & Misses but most of the promises made by him were nearly achieved.
Last year Modi in his speech focused on on a few important points which included Manufacturing, Finance, Cleanliness, Toilets, Digital Governance & Skill Training. Have a look at these images to find out what all Modi has accomplished in the recent one year. What do you think now? Whatever it is Haters are always going to hate Him. But the fact is he is working for the nation. From bringing in Foreign Investments to building toilets to developing the infrastructure. Modi has almost achieved all his targets expect the Black Money which surely is not that easy and we all know it.

This Is How We Used To Celebrate Independence Day In Childhood:
What Freedom To A Woman Means?