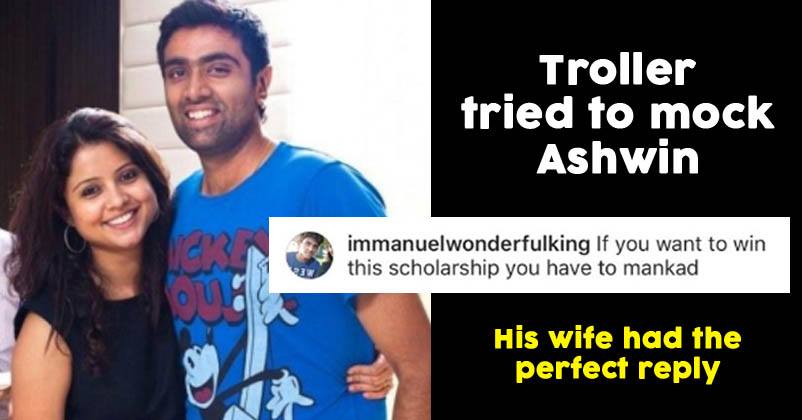 Indian cricket team player Ravichandran Ashwin must be very proud of his wife Prithi for standing by him and giving a befitting reply to his trollers. It so happened that Ashwin was already facing wide criticism for Mankading Jos Buttler in this year’s IPL (Indian Premier League) when a cricket fan tried to troll him about it on Twitter.

Ashwin was being trolled for his act on the cricket ground, which is not illegal but is considered against the spirit of the game. Ashwin Foundation posted a message on Twitter announcing its talent hunt program, writing, “All set to kickstart #GennextTalentHunt. Lots of children around waiting to showcase their skills.”

One of the fans stated that Mankad skill is required for the selection. Quoting the Foundation’s tweet he wrote, “Note: Selection process based on “Mankad” skills shown by bowlers. Batsmen selected based on the crease depth at which they keep their bat at the non-striker’s end. No need for wicketkeepers.”

That’s when Ashwin’s wife Prithi came with a kickass reply. With a picture of her previous comment to another fan, she wrote, “This is for you, sir.”

This is for you, sir. pic.twitter.com/mCfQeQthmQ

The proud couldn’t help but laugh at his wife’s witty reply to the troller.