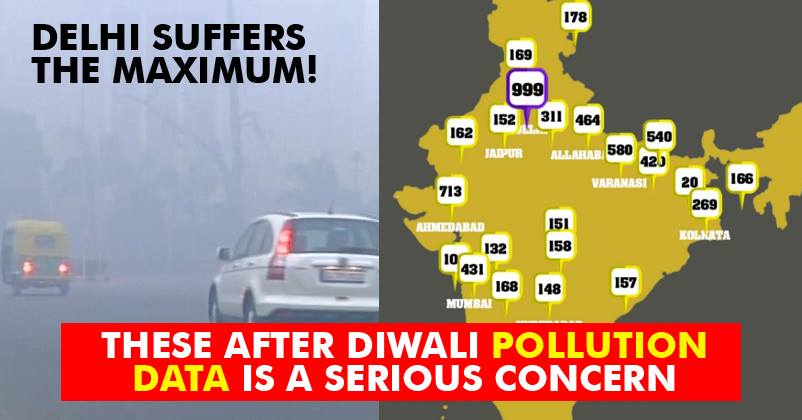 ‘SAY NO TO CRACKERS’

Aren’t many of us spreading this awareness in public since a very tender age? But, has it done anything good in favour of our environment even a bit? Or I think we haven’t just understood the reason behind shouting those slogans. Delhi being the capital of India already stays under the stress of pollution because of its increasing population. The increase in the number of people has increased the number of pollution causing vehicles.
But post-Diwali’s scenario this year was more than the worst. Diwali this year has caused the most pollution as compared to last three years.

Let me tell you that the white layer that you are witnessing every morning since after Diwali is not fog, it’s SMOG!

One of the hilarious scenes that I witnessed this Diwali was parents along with their children bursting crackers with pollution masks on! itni akal kahan se laate ho bhai? A report released by Indiatimes the very next morning after Diwali says that there was smog caused by the fireworks in Delhi and Delhi’s air was so polluted that everyone in the Capital might have faced problem while breathing.

According to the System of Air Quality and Weather Forecasting and Research (SAFAR),

Respirable pollutants were measured as, PM 2.5 and PM 10, clocked at 283 and 517 micrograms per cubic metre at 8 PM on Diwali night. They should have been at 60 and 100 respectively, and anything higher can mean particulate matter embedding itself in your lungs, making its way to your blood stream. The highest pollution causing area in Delhi was RK Puram this Diwali. However, Gurgaon appeared clean as compared to Delhi. Post Diwali the statistics on the Air Quality Index left everyone in surprise as it showed Delhi’s air at 999 whereas it’s safest to breathe at 150.
With such numbers, it was really dangerous for elders and children to step out. People who had any lung disease or allergies were at the risk the most!

It has also been said that not alone these firecrackers and vehicles are responsible for the increase in pollution. Farm smoke blowing in from Punjab and Haryana is also equally responsible. The burning technique that farmers opt to clear out their lands is also increasing the pollution in the air. We have reached a point where stepping out without a pollution mask can cause diverse harm to our respiratory system. If today is like this, what will be our tomorrow? What will we leave for our future generations?

It’s too late to change what has already been damaged but we definitely can stop ourselves from making further harms!

Have a look at