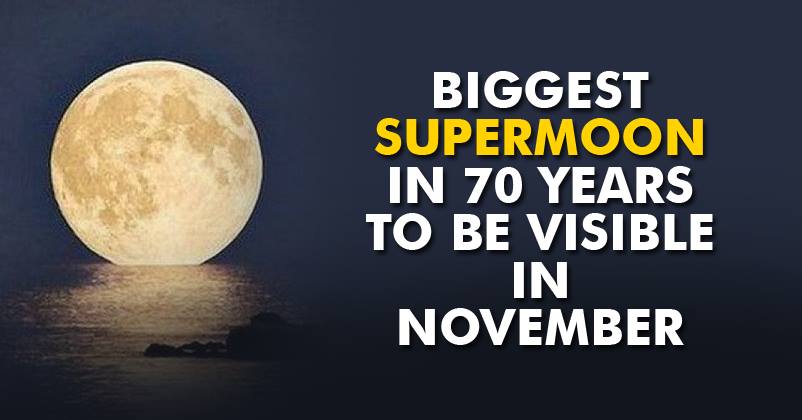 No matter how much we praise the beauty of the moon, it’s always less. In spite of having several marks on it, the moon is one of the most beautiful things gifted to us by nature. If you are a nature admirer as well, then I am sure you definitely don’t want to miss the supermoon which is all set to appear again this year! But, the unique fact about this super moon is that it will be a super-supermoon. It will be the closest to Earth than it has been since January 1948.

Though on October 16 this year, we have already witnessed a supermoon but the supermoon that will appear on November 14 will be 14 percent bigger and 30 percent brighter than an average full moon.

Will not that be so mesmerizing?

And in case you are thinking that it’s not a big news and you can miss out on this supermoon until the next time.

Then I must tell you that you won’t get to see the moon like this again before November 25, 2034.

So, just don’t take this as another normal thing and plan out a romantic date with your loved one for this supermoon. To get the best view of this supermoon make sure you see it from a spot where the moon is sitting closer to the horizon. As from that point, it creates an illusion which is popularly known as ‘moon illusion’.

“When the moon is near the horizon, it can look unnaturally large when viewed through trees, buildings, or other foreground objects,” says NASA. “The effect is an optical illusion, but that fact doesn’t take away from the experience,” said NASA.

Stay away from the bright city lights. Make sure you get a nice and dark place while viewing this beautiful supermoon on November 14. Also, stay awake till the morning as the moon will appear the biggest after reaching the peak of its full phase, i.e., the morning of November 14 at 8:52am EST (1352 GMT).

Will you be waiting for the supermoon to appear this November? Are you a nature lover? Do share your views in the comments section below!