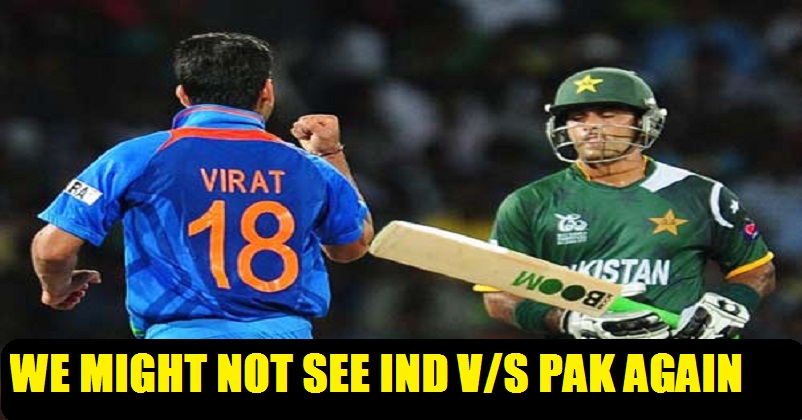 Uri attack has had a major impact on the country. India is mourning the loss of its brave 18 soldiers who sacrificed their lives, and at the same time, it is furious over the enemy i.e. Pakistan.

Now this attack has shown its impact on the field of cricket too. We know you used to enjoy those legendary India-Pakistan matches, but now IT MIGHT NOT HAPPEN anymore. At a press conference, some reporter asked Anurag Thakur, the BJP MP and president of BCCI, whether India would be playing cricket matches against Pakistan or not, after the attack. On that he replied “Priority is to expose Pak as country which sponsors terrorism. No question of playing cricket which such a nation”

“There are no tests or bilateral matches scheduled for this year with Pakistan and the question of playing against Pakistan today does not arise.” Thakur stated that the main priority is exposing Pakistan as a nation which openly promotes terrorism. He made a valid point by saying that India has already defeated Pakistan in all World Cup matches and all 3 wars and now, it is extremely essential to isolate Pakistan globally.

“There are two major issues in front of the world today — the sluggish economy which is affecting trade and terrorism. In the last financial year the world has suffered close to $60 billion loss. Apart from that India has suffered terrorism for the last three decades. The world is facing it now. They will have a better understanding on what India had gone through in the last so many years. That is why globally we are getting all the support, thanks to Modiji’s leadership,”

There is no question of playing cricket with Pak. Pak must be exposed: Anurag Thakur, BCCI President #BoycottPakOrNot pic.twitter.com/jewMMaYzmW

Hope you stick to your words!

Hope you stick to ur stand. Next will be " we will play with pakis but in Bangladesh .

We did this earlier too!

we have done this earlier as well.. nothing happens…some stern decision must be taken.

Pak is not interested in playing with Hindus anyway. BCCI statement is lame and unnecessary. Who f****** cares???

Rajeev Shukla and Anurag Thakur were interested in playing with Pak!

Hats off Anurag for your stand.

So guys, what do you have to say about this? Do let us know in our comments section below!

You’ll Be In Tears After Knowing This Tragic Love Life Of M.S Dhoni ! Read It Out…
9 India vs Pakistan Cricket Controversies Which We Can’t Forget! Check Them Out….